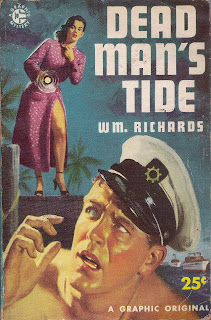 Day Keene's It's a Sin to Kill was one of the first books I reviewed here on Pulp Sereade, my fourth ever post. I still remember finding the 1958 Avon paperback in a cardboard box underneath the counter at Spoonbill and Sugartown bookstore in Brooklyn. 12 years later, I finally have a true first edition of the book under its original title, Dead Man's Tide, published by Graphic under the pseudonym "William Richards." Revisiting the book, I found it to be even better than I remembered.

Keene knew how to hook a reader fast by getting right to the story, and Dead Man's Tide is perhaps the fastest of them all. First sentence and he's already describing a nude corpse floating through the Gulf of Mexico, passing by schools of porpoises, then landing on a sand bar where crabs gather around it. It's macabre, grotesque, strangely erotic, and even more strangely serene. It's an elegantly written passage, among the most evocative and vivid that Keene ever penned. Keene then takes readers to a familiar set up: a man wakes up to murder and must go on the run in order to prove himself innocent. 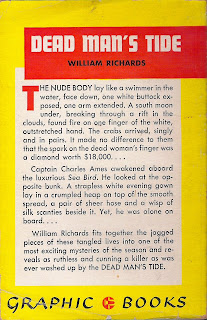 Charlie Ames wakes up  in a strange bed on someone else's boat. He's covered in lipstick. The ashtray is filled with cigarette butts, and an empty fifth of whiskey rolls on the floor. There's an empty a woman's dress and undergarments strewn about the room, blood on the carpet, and $5000 cash in his pockets. And the woman who owns the boat—cosmetics entrepreneur Helene Camden—is missing. When he corpse is found floating in the nearby gulf, Ames is suspected of murder. His girlfriend, lounge singer Mary Lou, believes he is guilty, until she finds a piece of evidence that changes her mind. But before she can show the police, somebody saps her on the head, steals the evidence, and dumps her body in the bay. And after Helene's maid—the one witness against Charlie—is found murdered, Mary Lou is the prime suspect. It's up to Charlie to find a way to escape and figure out who is framing both he and Mary Lou for murder.

Dead Man's Tide is classic Keene, hitting all the notes you'd expect if you've read any of his work before. Keene was a writer of formula, no doubt about that, but Dead Man's Tide shows what Keene was capable of at his best. The locale is atmospheric and cinematic, with a real physical sense of geography, as though Keene had walked these streets and sailed these waters—and since it based on St. Petersburg, FL where he lived for many years, he probably had. The main character, Charlie Ames, has all the everyman qualities that Keene was known for, but also a hint of fallen man tragedy—currently running a charter boat, he used to be a decent trumpet player for a band before he lost his lip, not a great musician, but passable. Ames's greatness was never even all that great, but even that is in the past. Then there's the plot, which throws twists at a rapid pace, but which Keene navigates masterfully, keeping everything straight and fair for readers to follow and try to figure out. The solution is not obvious, but a deft balance of surprise and plausible deduction. And the double-pursuit design, in which the protagonist must flee both the cops and the killers, is one which Keene would reuse quite often. 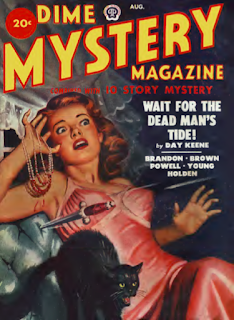 Ed Gorman, in his introduction to a collection of Keene's stories called We Are the Dead, wrote, "One thing I’ve always liked about Keene was his eye for the sociology of his settings and his people.  His books tended to be set in Florida or Chicago and he made sure you understood what it was like to live there." In Dead Man's Tide, Keene does a marvelous job evoking the tourist trade dynamics of St. Petersburg, with Ames relying on peanuts from tourists to get by, and his wife Mary Lou singing late night at clubs that cater to the rich. The city wouldn't exist without the services that Charlie and Mary Lou offer, and yet they're trapped there because they can't make enough to get out, making just enough to keep their head above water. The port is a perfect microcosm for the socioeconomic inequalities of the city, with Ames's ragged boat just a short distance from the Camdens's luxurious yacht.

One of the most interesting things about Dead Man's Tide is that it is based on an earlier short story, "Wait for the Dead Man’s Tide!” (Dime Mystery, August 1949). The structure of the plot is pretty similar, but the genders are completely reversed. It is Ames's wife who wakes up on the boat, and it is a man found floating in the Gulf. It's a great story, for sure, but comparing it to the novel reveals just how much depth and atmosphere Keene was able to inject into his novels without sacrificing any of the frantic pacing of his pulp stories. 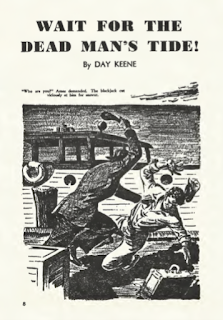 Dead Man's Tide also touches on one of Keene's recurring themes, troubled relationships. In both story and novel, Charlie and Mary Lou are variously placed into a situation where one of them can't trust the other one after they've been found on the boat and accused of murder. It anticipates a similar setup in Mrs. Homicide when a cop's wife awakens in a stranger's bed next to his corpse, and the husband must grapple with whether or not to believe his wife's innocence in the overwhelming face of evidence and colleagues that suggest she is guilty. Mistrust is also at the root of Bring Him Back Dead, and infidelity is also a theme of The Dangling Carrot.