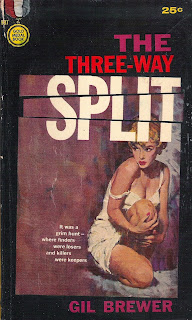 Gil Brewer's The Three-Way Split is a dynamite novel that ignites on page one and burns until the very last page. Desperate characters hell-bent on self-destruction and with nothing to lose—this is Brewer raw and unfiltered, and I loved every page of it.

Originally published by Gold Medal in 1960, it marked the end of a crazily productive decade for Brewer, who banged out a blistering run of 25 novels in ten years. It also marked the beginning of Brewer's professional decline—two novels in 1961, only one in 1962, and then a four year gap, followed by intermittent books for small publishers mostly under pseudonyms. His eleventh and penultimate book for Gold Medal, The Three-Way Split is both a milestone and a gravestone for Gil Brewer.

All of which makes The Three-Way Split an even more fascinating and bewildering text. Like a true noir protagonist, Brewer momentarily seems to be at the top of his game—and yet the bottom is just around the corner. The book's plummeting darkness and frenetic downward spiral are pure Brewer. Every turn of the page seems like the character is on the precipice of oblivion and holding on for dear life—and so, too, was the book's author, it now seems. Maybe that's why Brewer seems to have such a deep bond to his main character, Jack Holland, a man on his last leg who risks it all on a long-shot that could take him down and his loved ones along with him. 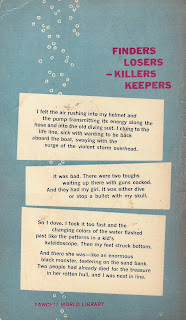 "All I had was this boat," laments Jack as he takes a group of yuppies out to fish who wind up drinking all day. When one of the passenger's diamond necklace gets tossed overboard, Jack dives in after it. And that's when he spots the sunken ship that he suspects is full of treasure. Back on shore, he enlists the help of Mike, a seventy-two year old sailor, his drinking buddy and the only one he can trust. His girlfriend, Sally, wants him to take a steady job at her office so they can be married, but Mike is determined to make this one big score. And then everything goes to Hell when his estranged father shows up with gangsters hot on his trail, and the secret ship that Jack hoped would save his life might just be his death.

Brewer's words are as soaked through with gin as his character's ramblings. There's a desolate poetry to his phrasing that was alway the hallmark of his best writing. When he describes Jack looking for the diamond necklace in the ocean, Brewer achieves a sort of serenity in self-destruction that reminds of David Goodis. "I dove straight down. The water was cool and it was good to be away from them. It was quiet and clear. I saw for the bottom, trying to figure current for drag, watching for the diamonds." This could be a metaphor for any of Brewer's protagonists, going down as far as they can go, dodging death, and looking for salvation.

One of Brewer's most beautiful passages from any of his books that I've read is his description of Jack's thoughts as he has a hamburger and black coffee and mulls on all the obstacles in his path to the treasure, all the ways that things are going wrong.

"It was liking being in a room with no windows or doors. You kept running against walls, slamming into them. You knew there was no way out. But back in your mind, something told you there had to be a way out. So you rammed, and rammed, smashing against those walls. You'd reel around and try again. Something had to give—either one of the walls, or you.

Human nature being what it is, you kept trying.

I was mad as hell. The sensation of being trapped worked up through me. I left the sandwich bar and started up the street toward my slip." 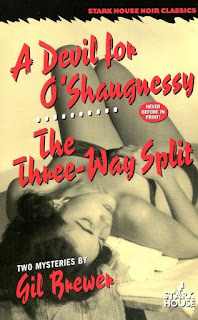 Even that last word has a dark, poetic double-meaning. "Slip" refers to the part of the pier where his boat is docked, but it could just as easily refer to a mistake he's making that could lead to his downfall.

As Mike pours Jack a glass of run, he waxes philosophic, "In wildness is the preservation of the world." For Brewer, wildness truly is the only way. Even though Sally practically hands Jack a 9-to-5 life with stability, that way of life was never an option. For a guy like him, it's all or nothing—wild or dead, and nothing in between.

The Three-Way Split is classic Gil Brewer—tight, economical, and pummeling. Currently, it's available from Stark House Press combined with an unpublished novel, A Devil for O'Shaugnessy, as well as three short stories, and essays by David Laurence Wilson and George Tuttle.