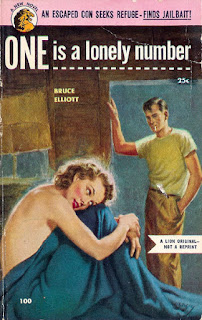 Bruce Elliott’s One is a Lonely Number was published in 1952 by Lion Books (a paperback publisher of such classics as David Goodis’ Black Friday, Jim Thompson’s The Killer Inside Me, and Day Keene’s My Flesh Is Sweet). The main character is Larry Camonille, an escaped convict with only one partial lung left, a bad cough that threatens to spew out what’s left of his lung, and five dollars in his pocket. He spends the dough on a prostitute, even though a doctor warned him that any exertion—smoking, drinking, sex, whatever—might be enough to kill him. So begins Camonille’s self-destructive binge on his way to Mexico, where he dreams of breathing the warm, dry air—if he can survive long enough to get there. Taking a job in a kitchen to make some money, Camonille shacks up with an epileptic juvenile girl dating one of his co-workers, then embarks on a foolhardy crime spree that even someone with two good lungs could hardly get away with.

This is our hero. Someone so despicable that even Jim Thompson’s characters seem civilized. Someone so sleazy and depraved he makes Harry Whittington’s protagonists seem wholesome. Comb any of the noir films or crime novels from that era and you won’t find anyone so unapologetically degenerate as Larry Camonille. This might very well be the bleakest noir of them all. Page two of the book, and he describes himself as, “Thirty-two years old and dead. A corpse looking for a place to lie down and pull up the earth around it.” This is about as uplifting and likable as Larry gets. 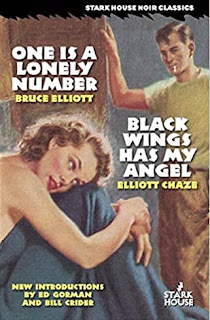 Camonille exemplifies that noir existentialism that seeks to bring on doom and damnation faster, harder, and more violently. Ed Gorman (one of the most perceptive and influential commentators on crime fiction, in addition to being a first-rate novelist himself) nails the challenge and appeal of One Is a Lonely Number in his introduction to the Stark House Press edition:

In [Cornell] Woolrich and [David] Goodis you generally sympathize with their lead characters but with Camonille, especially in the early chapters before he reaches you, you sit back and observe a crazed animal trying to elude capture. Only gradually does Elliott begin to humanize him and once again I give Elliott points for taking a big risk. He lets his man scare you a few times before you begin to understand him.

From inner city drug dens to small-town juvenile delinquent sex clubhouses, Elliott—like Orrie Hitt—reveals the American landscape's latent capacity for degeneracy. Nothing is sacred, no place is safe and, most importantly, nobody is innocent. Elliott’s book, like Hitt’s I’ll Call Every Monday, offers an alternative history of 1950s American ideals. It’s a prime example of the challenges that brutal noir fiction represented to pervading moral standards. If there’s anything heroic about Larry Camonille, it's that he is unapologetic. Elliott doesn’t excuse his actions with Freudian pardons or sentimental longings. Camonille is wholly self-aware—of course he’s also self-loathing, and his actions are like a long, protracted suicide—but right up until the last page, a symphonic rhapsody of oblivion, Camonille knows what he’s doing, and he never apologizes for it.

This review was originally published by the Los Angeles Review of Books on February 10, 2013.
It appears here in a slightly revised form.