"Kiss Her Goodbye" by Mickey Spillane and Max Allan Collins (2011) 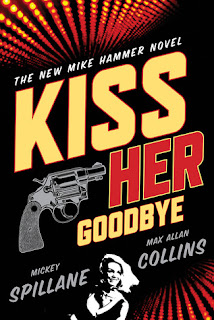 In Kiss Her Goodbye, Mickey Spillane’s Mike Hammer—one of the preeminent archetypes of the private detective—is back on the streets of the Big Apple. Spillane started the novel in the 1970s, but eventually abandoned it, uncompleted. In 2006, half a decade after his death, Spillane’s close friend and collaborator, Max Allan Collins, completed the book.

As Kiss Her Goodbye begins, Hammer is in Florida. He’s been away for a year in semi-retirement after a deadly shootout with a mob boss. The supposed suicide of his former mentor calls Hammer back to New York, and he doesn’t like what he sees. The city has changed, so have the people he knew, and so has Hammer. Now it’s time to get things back to the way they were. Convinced his friend’s suicide was staged, Hammer opens the case and uncovers corrupt politicians, international drug schemes, mob wars, wayward young women, androgynous Brazilian singers, and a complex web of mysteries that only Hammer and his trusty .45 can solve.

Kiss Her Goodbye is a throwback in the best sense of the word: it reminds us why Spillane was so good in the first place; and Collins, too, for that matter. Dexterous and dynamic plotting, swift and explosive action, snappy dialogue, graphic metaphors, and energetic characters that come alive: this is action-mystery par excellence. Spillane’s and Collins's style is masterful. At times, their prose is as staccato as a gunshot, while at others it resembles stream of consciousness, a torrent of thought and action with which words can hardly keep up. In its more experimental moments, the novel even shows traces of Imagism, though I’m sure Spillane would shun such scholarly tags, even I hesitate to ascribe theory to his instinctive style of writing. Perhaps his most endearing trait (and one of my favorites) is that few dare to use italics as often—and as effectively—as Spillane:

…my head still full of the wild banging of handguns and the crazy booming of shotguns, echoing across the pier, flame belching right past my face and even though I didn’t feel the impact of the slugs that took me down I could remember the numbness and the slow drifting away that began to smother me. The face was there, too, blood smeared across the Bonetti kid’s mouth, tight in a mad grin as he poked the barrel of his .357 against my forehead and said, “Die, you bastard,” as he started to squeeze the trigger but he shouldn’t have taken the time to say it because the .45 in my fist went off and his finger couldn’t make the squeeze because the brain that should have sent it signals shut off like a switch as Bonetti’s head came apart in crimson chunks like a target-range watermelon. 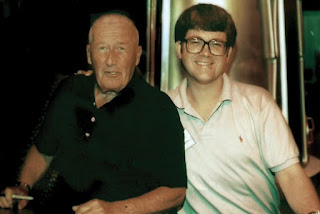 At the same time, Kiss Her Goodbye isn’t a mere rehashing of the past. While Hammer himself struggles to fit into the 1970s, it is to Spillane and Collins’s great credit that they manage to place Hammer in the middle of coked-up, disco-centric, late-seventies New York without turning the whole show into an In Like Flint parody. (The fact that Hammer no longer smokes is, perhaps, a little too up to date, who can blame the guy for wanting to look after his health just a little, considering all the other chances he takes.) While he’s more liberal and no longer lambasts the Communists (or blasts them, either), there’s something timeless about Hammer’s persona that would fit any era: he’s an individual driven by his intolerance toward a complacent society. Where law and order seeks to “keep the peace,” Hammer prefers to create disorder, in order to highlight injustice and corruption. He’s also funny, charming, quick with a gun, lands a hard punch… and so what if he’s a bit arrogant? That’s all just part of the appeal. Kiss Her Goodbye has all the blood of One Lonely Night, and a shocking finale that rivals Vengeance is Mine. In short, it’s classic Spillane, as good as the old stuff. Spillane (thanks to Collins) can still keep up with the new generation, and maybe even teach them a lesson or two.

This review was originally published by the Los Angeles Review of Books on September 17, 2011.
It appears here in a slightly revised form.