Gregory Mcdoanld on Words and Writing 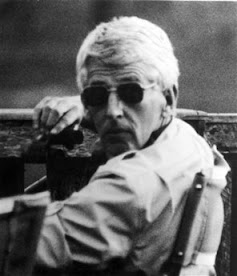 "I work very hard at being simple. By the time a person is 18 years old today, he has seen 21,000 hours of film at 24 frames per second, and he has just incredible images already built into his consciousness or unconsciousness. Back when Sir Walter Scott was working, he was writing for people who hadn’t been 50 miles from their houses. So if he was describing a street in Edinburgh, let alone Paris, he’d have to describe what was going on and what everyone was doing. Now, unless you are writing about something really exotic, you have this incredible bank on which to draw. Where Sir Walter Scott used 7,000 words, I can get it down to seven by conjuring the images that are already there."—Gregory Mcdonald, in conversation with Bruce DeSilva

Posted by Cullen Gallagher at 12:45 PM

Email ThisBlogThis!Share to TwitterShare to FacebookShare to Pinterest
Labels: Gregory Mcdonald, On Words and Writing