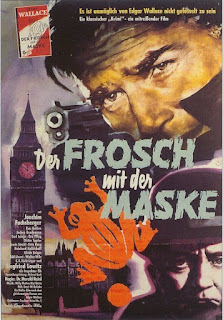 A woman is roused from her bed by a strange noise in the night. Her husband suggests it is just the frogs outside and goes back to sleep. Going downstairs to investigate, she is shocked to see a man in a frog mask wielding a blow torch to her safe. Before she can scream, a man sneaks up behind her, clamps his gloved hand over her face, and hauls her off-screen. Such is the bizarre pre-credit sequence of Der Frosch Mit Der Maske (1959), a film which inaugurated what would become a landmark series of movies that we now call "Krimi"—German films based around the works of British author Edgar Wallace. Born in 1875, Wallace was an incredibly prolific author, penning over 170 novels, 18 plays, and nearly 1000 stories before his death in 1932 at age 56 while he was writing the script to King Kong (figures according to Wikipedia).

Deliriously pulpy, the Krimi films dusted off old mysteries and modernized them, infusing archaic tales of arch villainy and old dark houses with heightened depictions of violence and an atmosphere of surreal, uncanny terror set to swinging, hot jazz scores. The adaptations were mainly produced by Rialto studios. Samm Deighan points out in her essay "Smooth Kriminal: An Introduction to the German Krimi Film," these films combined aspects of multiple genres, including "horror, crime, mystery, and police procedural, with moments of fantasy, science fiction, or surrealism." They reinvented notions of the cinematic crime thriller, paving the way for even more graphic murder mysteries the following decade in Italy known as "giallos." 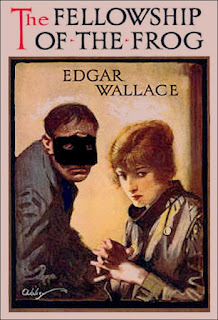 Der Frosch Mit Der Maske is based on Wallace's The Fellowship of the Frog, originally published in England in 1925 by Ward Lock & Co. A German translation was published in 1930 by Leser-Vereinigung Gutenberg-Verlag. Christensen & Co., but it was a 1952 paperback reprint in Germany that helped to repopularize the author in Germany. Just as France had its black books (the Serie Noire published by Gallimard) and Italy had yellow books, il Giallo Mondadori), so, too, did Germany have their own colorful paperback crime series. Published by Goldmann, the Goldmann Taschen-Krimis were a series of paperback crime novels recognizable by their red covers. The International Crime Fiction Research Group points out that "Due to the predominant red colour on the books cover, this series is also called die Rote Reihe, the  Red Series." A catalogue of the publisher reveals that not only was Wallace one of their most frequently reprinted authors, but also that Der Frosch Mit Der Maske was the initial book that launched the series.

Released in the US under the name Face of the Frog, Der Frosch Mit Der Maske is about an arch villain know as "The Frog" that is behind a string of crimes. The Frog's henchmen all bear a tattoo on the underside of their left wrist of his mark. After an undercover agent is found murdered, Scotland Yard and a wealthy American amateur detective follows clues that lead to the Bennet household, where The Frog frequents at night to express his interest in the family's daughter, Ella. 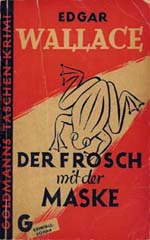 The labyrinthine plot is more complex and too vaguely sketched for one to possibly figure out on first viewing, perhaps because Wallace's 300-ish page novel was condensed to a swift 90 minutes, and perhaps because logic is not the key to this film's success. The story is a mere framework for director Harald Reinl (director of several Winnetou westerns with Lex Barker and Pierre Brice), who concentrates more on creating a few memorable set-pieces that evoke to an atmosphere of intrigue and allure that lingers in one's memory long after the absurdities of the plot have withered into nonsense. In addition to the striking opening sequence, there is the titular Frog's costume, a billowing black cloak with bulbous eyes, a monstrosity at once outlandish and cheap-looking but also unsettling and unforgettable; beautiful location footage of the Copenhagen waterfront at night; The Frog's basement lair; the chiaroscuro lighting in Ella's room at night as The Frog breaks in and leave's his mark by her bedside; an overturned police car, smoking in the night; a breakout that takes a particularly brutal turn into a knock-down, drag-out fight involving electrocution and knife-throwing; and a chilling closing scene of a woman bound to a chair, tortured with a flaming poker before being mercilessly gunned down. 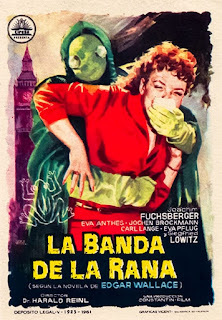 Mickey Spillane once said, "Your first line sells the book. Your last line sells the next book." Applied to this movie, it might be said that the lasting impact of Der Frosch Mit Der Maske resides in its opening and closing sequences. The pre-credit sequence became a staple of the Rialto Wallace adaptations—a short but memorable shock to excite and draw the audience in. And the climax, in particular, can be seen as the real birth of the series's aesthetic, a scene both disturbingly and seductively violent, which would set the tenor for future films, and would set a new bar for cinematic thrillers.

The formula created by this film was a success. As Wieland Schwanebeck explains in the essay "From German Grusel to Giallo: Transculturality in the West-German Edgar Wallace Series," "The gamble paid off—the first two Wallace films produced by Rialto as Danish-German co-productions, Der Frosch mit der Maske (Face of the Frog, 1959) and Der rote Kreis (The Crimson Circle, 1959), were so successful that Rialto set up a branch in Germany and hired Horst Wendlandt to provide a steady flow of new Wallace films." Rialto would ultimately make 32 Wallace adaptations between 1959 and 1972, and their impact would reach far beyond just those films. And it all began here, with a mastermind criminal in a frog mask cracking a safe in the dark of night.