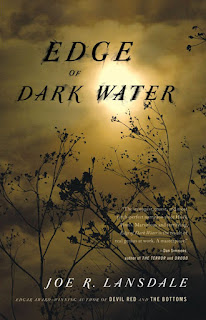 Imagine the literary love child of Carson McCullers and William Faulkner, but way more twisted, with a penchant for dismemberment, and a hell of a lot funnier. That's Joe R. Lansdale's Edge of Dark Water (2012) in a nutshell. Lansdale's teenage narrator, with her blend of youthful naivety and old-before-her-age-wisdom, recalls Frankie from The Member of the Wedding, while the overarching sense of history and Southern mythology recalls Faulkner's geographic and genealogical sensibility.

Set in the swampy backwaters of East Texas during the Great Depression, Edge of Dark Water tells the story of Sue Ellen, a teenage girl who uncovers the bloated, rotten corpse of her friend May Lynn while fishing with her father. The prettiest girl in town, May Lynn always dreamed of making it to Hollywood. Dead set on making that dream come true, Sue Ellen and her two best friends plan to exhume May Lynn's corpse (in multiple pieces, mind you), burn it, and take the ashes on a river-and-road trip to Hollywood. They plan to finance their journey with May Lynn's cache of stolen money, and that might just be their undoing. Soon they find themselves on the run from May Lynn's greedy family, as well as a mythic tracker named Skunk, who smells of death and wears his victims' body parts as jewelry.

Though it is both an endearing coming-of-age saga and a grotesque, Southern Gothic fable, let's not forget that, at heart, Edge of Dark Water is a great crime story. You have the murder, the stolen money, and the magnificent chase down the Sabine River that blends all the excitement of a breakneck getaway with the magic realism of Davis Grubb's Night of the Hunter and Huckleberry Finn's defiant rebellion. But for all the comparisons one might draw to other authors, Lansdale is a true original. Since breaking onto the literary scene in the early 1980s, Lansdale has been slicing-and-dicing genres and serving up wild hybrids with his patent offbeat humor, grotesquerie, and riveting storyteller's voice. Lansdale spins the type of campfire yarns that keep you around long after the marshmallows are gone and the embers have grown cold.

As funny as Edge of Dark Water often is ("Uncle Gene was fat as a hog, but without the personality"), it never descends to parody. There's a deep sincerity to Lansdale's characters and the situations in which they find themselves, whether it be carrying a friend's severed limbs, poisoning a lake with one's father and waiting for the fish to float up, or coming to terms with a mother's alcoholism (and how a father emotionally and sexually manipulates it). There's a simultaneous simplicity and profundity to Sue Ellen's observations—"It hurt to think I was losing Mama to twenty-five cents a bottle and a lying dream"—that is crucial to keeping her voice as believable as her experiences can allow. And in that respect, Lansdale succeeds impressively.

Early on in the book, Sue Ellen reflects:

The mockingbird is a kind of thief, same as I planned to be. The big difference was he seemed happy about it and I didn't, and I hadn't stolen anything yet, outside of cane and watermelons.

It's a humble beginning to a life of crime—and the start of a great adventure.

This review was originally published at the Los Angeles Review of Books on March 31, 2012. It appears here in a slightly revised form.