Edgar Wallace on Words and Writing 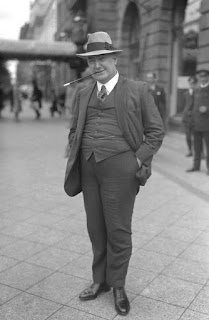 "[Edgar Wallace] would shut himself up in his study with a Dictaphone, an endless supply of cigarettes and fresh pots of tea brought in from the kitchen by a servant at regular intervals, and dictate the text using only a bare outline of 1,500 words, in addition to a hastily composed list of character names, places, and a few scraps of additional material to be inserted into the narrative as authentic talismans of the material world.
"Thus engrossed, Wallace would dictate an average of 3,000 words around the clock until the text was finished, and then retire to his bed to recuperate while Curtis finished the typing. Once he had completed his dictation, in fact, Wallace scrupulously avoided reviewing the typed transcript of his work; as soon as the typing was completed, off it went to Hodder and Stoughton, Ward Lock and Co. or one of Wallace’s other publishers, and the author was free to contemplate his next assignment."—Wheeler Winston Dixon, "The Colonial vision of Edgar Wallace," The Journal of Popular Culture, Volume 32, Issue 1, 1998

Email ThisBlogThis!Share to TwitterShare to FacebookShare to Pinterest
Labels: Edgar Wallace, On Words and Writing