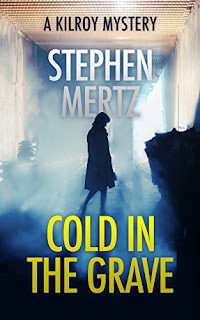 In Cold in the Grave (2018), Stephen Mertz reaches back forty years to 1978 to revisit the detective from his first novel, Some Die Hard. The earlier novel's protagonist, Rock Dugan, has become Kilroy. He's still a Vietnam vet and ex-Hollywood stuntman currently making ends meet as a private eye in Denver, but Kilroy is less meta than Dugan, making fewer references to Erle Stanley Gardner and Raymond Chandler than his predecessor. Rather than compare himself to his literary P.I. models, Kilroy follows in their footsteps. A rogue at times, a knight at others, honest with the goodhearted, willing to bend (and sometimes break) the law in the name of truth and justice (and his client's paycheck)—in short, he's everything a classic private eye should be, and he fulfills the role in spades.

Set in 1975, Cold in the Grave finds Kilroy on the trail of a missing woman. His client, Robert Pierpont, is concerned that the girl he likes, Cheryl Kaplin, may be in trouble. He hasn't heard from her in weeks, and he found a ransom note on her dresser after he broke into her apartment. Kilroy thinks she might just be giving him the cold shoulder, but he agrees to look into it. Kilroy finds Cheryl at a local mob-run club that fronts as a cathouse where Cheryl is a prostitute. She tells Kilroy that she wants nothing more to do with Robert because she's "working on pulling a big change in my life right now." Kilroy can't bring himself to break the news to his client, so he decides to make one more visit to the club. This time, he finds Cheryl dead—and whoever killed her also has their sights on Kilroy. Soon, he's dodging mobsters, cops, politicians, thugs, and dames as he tries to figure out who killed Cheryl and why they wanted to keep her quiet—forever.

Cold in the Grave is classic private eye fiction start to finish, and it could have easily been printed at Gold Medal, Lion, or any of the other 50s paperback houses, and it would have stood up well against their best offerings. Mertz's prose is pristine and economical, and his plotting is streamlined and dynamic. I also appreciate the humor that Mertz injects into the story. Some of Mertz's most playful moments recall the whim of Richard S. Prather—ironically named thugs like Limp Gallagher, nympho redheads answering the door, and a wild finale that would even make Shell Scott's head spin—but make no mistake, he isn't writing a satire. Mertz loves and respects the literary P.I. tradition in which he is writing—he's faithful to its tropes, smart enough to keep readers surprised, and skilled enough to make it all look effortless. He achieves a balance of hardboiled action with the right dose of wisecracks that should satisfy any reader looking for a jolt of excitement and mystery.
at September 08, 2020