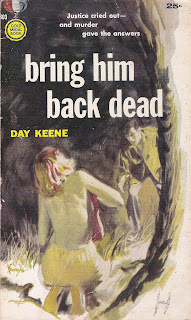 Bring Him Back Dead is one of Day Keene's grimiest books. Set in the Louisiana bayou, the book is saturated with sweat—not just from the Delta humidity, but from the seething rancor of its characters, the alcohol they've been drinking, and the nastiness they can't suppress any longer. Originally published by Gold Medal in 1956, Bring Him Back Dead fits into Keene's characteristic "wrong man accused of murder" scenario, but there's a bitterness and darkness that distinguishes it as one of his most noir novels. And like many of Keene's books, the story unfolds over a manic, sleepless couple of days, which contributes to its fever-dream, hazy atmosphere.

You know your main character is a Grade A heel when, on page 2, he steps out of his house and a bullet comes within an inch of his life, and his response is to withhold it from his wife so that he may deny "her the satisfaction of knowing how close she had come to being a widow," and then casually go about his day. He immediately suspects that the shooter was his wife's brother, Georgi, and that he wanted to free his sister from a marriage to "a $250-a-month oil boom-town deputy sheriff."

Latour used to have a bright future. As C.I.D. officer stationed in Singapore, he learned that there might be oil on his home back in Louisiana. He married Olga, who came from a family of Russian emigres that left because of the Revolution and relocated to Japan. Returning home, the newlyweds discovered that there was no oil on the property. Disappointed, Latour settled into a job as a deputy and slowly alienated himself from his wife and accepted his life was over.

And now someone is taking pot shots at him. So, one night, he goes into the bayou to look for evidence of his shooter, and finds "four cigarette butts and a thirty-thirty shell casing." But when he goes to ask Lacosta, who runs a road-side attraction with his new wife, Rita, someone saps him from behind. When Latour awakens, the evidence he found is missing, Rita has been raped, Lacosta has been murdered, and Latour has been framed for the crimes. With a lynch mob and the law on his tail—as well as the shooter—Latour must exonerate himself and figure out who is out to get him. 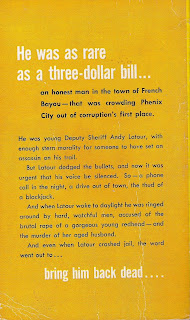 Strained marital relationships are a recurring motif in Day Keene's novels, and this theme is central to Bring Him Back Dead. Right from the first page, the resentment felt between the characters is palpable: Olga tells her husband, Deputy Latour, that breakfast is ready, and his only response is to put his Stetson on a chair and silently reflect that "With the exception of the nightly farce she insisted on enacting, conversation between them had been reduced to the bare minimum." In Keene's other novels, the theme is often expressed as husband that has to prove his wife's innocence, or otherwise is ignorant about her past. Bring Him Back Dead diverges from this pattern by disassociating the martial discord with the wife's history. Unlike in, for example, Who Has Wilma Lathrop? or Death House Doll, Olga is not withholding some aspect of her past that returns to cause problems and set the plot in motion. Instead, the marital tensions in Bring Him Back Dead originate from the husband and his own alienating tendencies that spring from his self-loathing and depression. Keene even allows Olga to Latour. "That is not the question. The question is how you have treated me. You built a wall between us. You no longer even conversed with me. You acted as if I despised you. . . . Nothing would have mattered, because I would have known that you loved me. But instead you built this wall I could not climb." It's a powerful moment—unusual for Keene, who normally puts more emphasis on plot and pacing—and makes for one of the most affecting and heartfelt moments in any of the author's works.

Anthony Boucher, in his New York Times column "Criminals at Large," praised the novel with slight reservation: "It's all somewhat oversexed and oversimplified, but fast and concise" (October 21, 1956).

Like all of Keene's work, Bring Him Back Dead really moves. From the moment on page 2 that Latour steps outside and gets shot at, he barely stops moving for the rest of the book unless he's blacked out or behind bars. And like his best work, this book is a stunning example of masterful plotting and pacing. A Keene book is as tight as they come, and I'd rank Bring Him Back Dead among his tightest and his best—and certainly among his darkest. And, if you can find the original Gold Medal edition, it features fabulous cover art by the great Barye Phillips.