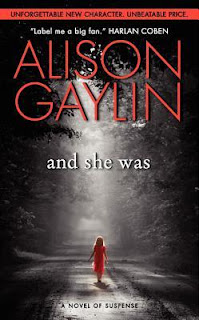 In And She Was (2012), private investigator Brenna Spector tackles a double missing persons case. Eleven years ago, 6-year-old Iris Neff was also seen getting into a strange blue car before vanishing. Now Carol Wentz, a friend of the Neff family, has gone missing. Her wallet was found at the scene of Iris's disappearance, with Brenna's phone number inside. Suspecting a deeper connection between Carol and Iris—and perhaps with her own sister—Brenna reopens the case in hopes of finding all three.

The result is a moody, densely layered mystery whose emotional notes are as affecting as the plot points are enthralling. Gaylin excels at getting us into her protagonist's complex (and crowded) mind. "There's a reason why we see the past in softer and softer focus until it's forgotten down to snippets, sensations. Few people understood what a luxury that was, the ability to forget."

Brenna Spector cannot forget anything. She suffers from hyperthymestic syndrome, a rare cognitive disorder that lends her almost total recall. Brenna's condition is a near-constant assault of sensation, emotion, and history, and nothing plagues her more than the one case she has never solved. When they were still children, Brenna's sister was abducted by a strange man in a blue car. The traumatic event triggered Brenna's disorder, and she's been trying in vain to find her sister ever since.

Thematically, And She Was resonates with the work of some of her contemporaries such as Megan Abbott's The End of Everything and Sara Gran's Claire DeWitt and the City of the Dead, both of which also delved into the "missing young girl" scenario. All three of those books are outstanding novels, and each offers a unique perspective on the topic. Abbott's book dared to venture into the burgeoning minds of adolescent girls, capturing that rapturous fantasy of being carried away from one's drab suburban surroundings, whereas Gran and Gaylin chose to deal with the aftershocks of disappearance. Both of their novels feature female protagonists who turned to private detection in order to find their missing friends and family members, as well as a near-hallucinogenic relationship to the past, but while Gran's detective  takes mind-altering drugs, Gaylin's P.I. needs no such external stimulation.

And She Was is a labyrinth of crisscrossing histories and unsolved mysteries, a model of superb narrative craft. Gaylin tackles three interlocking stories at once, and the complexity is all the more astonishing for its clarity. Tonally, Gaylin's protagonist readily dons that noir cloak of self-loathing: Brenna Spector reaches near-Goodisian heights of regret and depression. Gaylin doesn't shy away from the darker aspects of her characters, and by the book's it, end it is clear that Brenna hasn't finished plumbing the depths of her past.

This review was originally published at the Los Angeles Review of Books on March 31, 2012. It appears here in a slightly revised form.