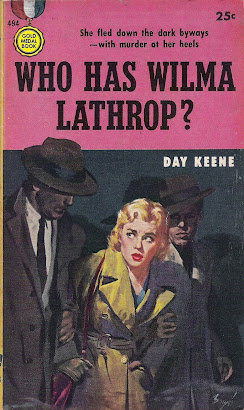 Originally published by Gold Medal in 1955, Who Has Wilma Lathrop? was Day Keene's fifth novel in three years for the imprint, and his 24th novel overall in five years—clearly, Keene was a busy guy. He wrote with the fury and economy of a true native pulpster, wasting nary a word. Who Has Wilma Lathrop? exemplifies the relentless, breakneck pacing that characterized Keene's best work.

Set in Keene's hometown of Chicago, the novel begins with Lathrop, a high school teacher, in the lobby of the Juvenile Court Building. He calls home but his wife, Wilma, doesn't pick up. Outside, two strange men approach Jim claiming to be acquaintances of his wife. They give him a package for her containing $5000 and a message saying they want their cut of the loot. Then they knock him unconscious. When he awakens, he goes home and finds Wilma preparing dinner. She claims to know nothing about the men, and Jim believes her. But when he awakens the next morning, she's gone. Was she kidnapped? Did she run away, either to escape those men or join them? When he goes to the police, things get worse. They ID his wife not as Wilma Stanis, the secretary he married, but as Gloria Fine, a gangster's moll wanted for murdering her boyfriend and possession of $200,000 in stolen jewels.

In terms of tone, Who Has Wilma Lathrop? is one of Keene's lighter thrillers, and I appreciated that. The good guys are good, the bad guys are bad, the plot zips by with a couple of good twists, some rousing fights, a few close getaways, and a big shootout at the end. There's even some laughs, as Jim spends the first half of the book without his glasses (which also works as a metaphor for his "blindness" about the situation). 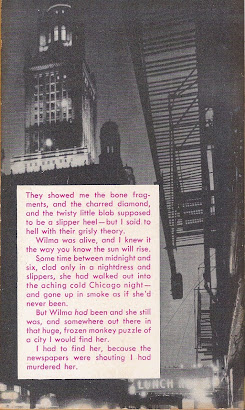 The narrative is very Hitchcockian in design, with an innocent man thrust into a world of intrigue, dodging gangsters and cops, suspected of crimes he did not commit, and ignorant of what the whole affair is really about. The MacGuffin (Hitchcock's word for the plot device that the characters care about which the audience doesn't) is, of course the jewels themselves. Everyone in the novel wants to know about them, but Jim—and the readers—are more really want to know about his wife, Wilma, and whether she was was the loving person he thought she was, or whether she's the duplicitous femme fatale that everyone else says she is.

Acclaimed author and critic Anthony Boucher favorably reviewed the novel in the New York Times, writing that "Day Keene manages to treat a vivid and violent plot with unusual restraint and quietly convincing realism. . . . and the writing, in characterization, prose and movement, is the best I’ve read from the always interesting Mr. Keene."

Day Keene has never let me down. For plotting and pacing, he always delivers plenty of thrills, and Who Has Wilma Lathrop? stands up alongside the best of his paperback originals.

The edition photographed is a first edition paperback original from my collection that features terrific cover art by Barye Phillips.

This review is posted in conjunction with Friday's Forgotten Books.