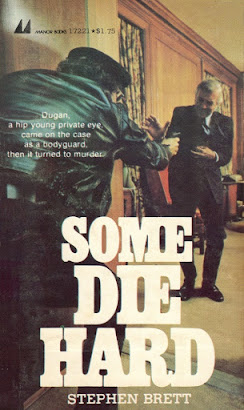 Originally written with a nod to the classic private eye novels that inspired him, Stephen Mertz's Some Die Hard (1978) has since become a classic in its own right. It's got everything you want out of a P.I. novel—a tough guy detective, an impossible locked-door murder, a contested will, squabbling inheritors, and gangsters and dames aplenty. But while Some Die Hard may follow in the footsteps of its forebears, it doesn't walk in their shadow. Mertz honors tradition in the best way possible, by crafting an intelligent and innovative mystery and bringing new surprises to the table. 42 years after its first publication, Some Die Hard still feels fresh and exciting.

The story begins with Rock Dugan, private eye, Vietnam vet and ex-Hollywood stunt man, taking a bus back to Denver from a job. As he's getting off the bus, the man in front of him turns around and bumps into him, then takes off running as two hoods chase him. The man doesn't get too far before he's hit by a cab. That's when Rock notices the man had slipped something into his book back on the bus—a letter addressed to Susan Court. Hand-delivering it to Ms. Court, Rock finds himself drawn into a family conflict. Susan has been cut out of her father's will, and now he plans to reverse the decision and reinstate her and cut out her brother, a drunken louse with lots of gambling debts. Rock agrees to accompany her home to Langdon Springs to look into things. But Rock's not there for more than a few hours before he finds himself deep in a murder case, and dodging thugs and local police who would rather he go back to Denver. 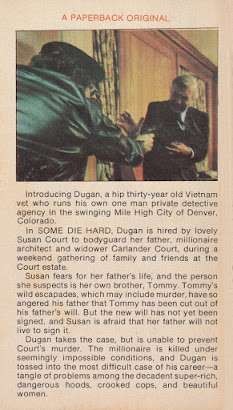 Mertz's affection for, and knowledge of, the genre is evident from the start, as he imbues his main character with the same literary passion. One page one, the narrator explains, "I'm a mystery fan, have been since I was knee high to the Hardy Boys, and I'd brought along a Perry Mason paperback that I'd somehow never got around to. Everything Gardner ever did is topnotch and this one was no exception." Some Die Hard is thoughtfully planned and carefully executed, and Mertz's plotting and prose are clever in all the right ways. The book never drags for a second, and Mertz is such a smooth stylist that he makes it all seem effortless.

One of the things I most liked about Some Die Hard is that as tough as Dugan is, he's also really intelligent, and in classic detective tradition, it is logic and not brawn that ultimately unravels the mystery. As Evan Lewis points out in his review of the novel, "Unlike Race Williams, Dugan uses his brain—rather than his guns—to solve the case." Mertz combines the thrills of men's action novels of the time the intellectual puzzle element of more archetypal locked-room mysteries. There's plenty of great action here—fist-fights and shoot-outs—but it's even more satisfying to see how elegantly Mertz reveals the solution.

Originally published in 1978 by Manor Books, Some Die Hard appeared under the pen name "Stephen Brett," a nod to one of Mertz's favorites, Brett Halliday. The publisher was, in Mertz's words, "a low-end New York publishing house in the 1970s, operated by a pack of thieving scuzzballs." He sure knows how to get to the point without wasting words. As he describes in his essay "From the Manor Torn," Manor had placed an advertisement looking for “new novelists outside the New York area.” When his paycheck didn't arrive, he realized they just wanted novelists far from New York so they couldn't come knocking. Mertz promised a local lawyer friend free books from his bookstore in order to help him convince Manor to pay up. It worked.

If you're looking for a smart, fast-moving P.I. novel to entertain you for a few hours, you can't go wrong with Mertz's Some Die Hard. And when you're done with that, check out Cold in the Grave (2018), the first in Mertz's Kilroy series, which picks up the Dugan character and reinvents him as Kilroy.