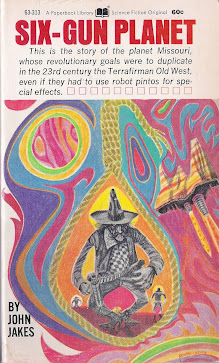 Six-Gun Planet is a thrilling and comedic space western—equal parts western and science fiction—by John Jakes, an author who was successful in both genres, and is best known for the widely acclaimed historical series The Kent Family Chronicles and the North and South trilogy. With one hand in the dust and another reaching for the stars, Jakes satirizes the most iconic and beloved hallmarks of western and science-fiction. From robot steeds to barroom brawls, and holographic communications to high noon showdowns, it's a crackling and clever outer-space oater.

Published as a paperback original in 1970 by Paperback Library, the novel is set on the planet Missouri in the 23rd century. Society has decided to emulate the old west on planet Earth. Our main character is a bounty hunter named Zak Randolph whose job is to round up specimens—Living Antiques, they're called—to act out showdowns and other examples of frontier thrills for tourists. Unfortunately, one of his is contracts, Hansi Bonn, has gone AWOL, and it is up to Randolph to retrieve Bonn or else he will be held responsible. But since Randolph is a pacifist, he's going to have a hard time wrangling the hardcase Bonn to go back to being a Living Antique—and an even harder time dealing with Buffalo Yung, a mythical gunslinger who roams from town to town despite reports of being killed. 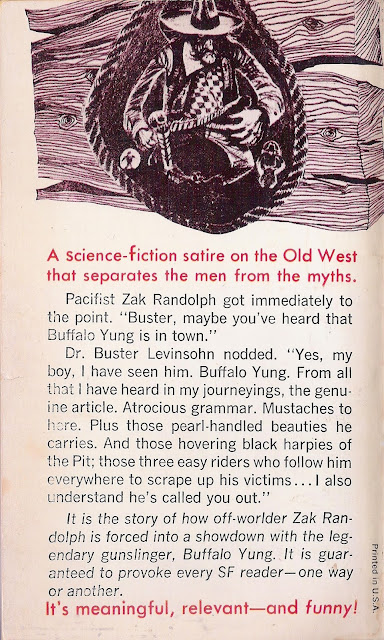 As funny as it is—and I thought it was hilarious at parts—Six-Gun Planet is more than just satire on genre conventions. After a rollicking start, the novel takes a sobering turn towards the end. Beneath the lampooning is a sobering political allegory for a society that idealizes the worst, most violent aspects of history with complete disregard for progress. Six-Gun Planet was released in April 1970, following a decade of social unrest, violence, and assassinations in the United States. The US was deep in the Vietnam War and the Cold War. Six-Gun Planet critiques a culture that is obsessed with the spectacle of violence and that has created an economy that exploits and profits off its perpetuation, and even Zak Randolph isn't exempt from being complicit in this process. John Jakes also seems to be channeling Plato's parable of the cave in his depiction of a government that rules based on the shadow of threat.

The original paperback edition features fabulous psychedelic cover art by Richard Powers and features his "Powers LAZorg" signature. According to quotes from Jane Frank on the Hedonia website, this was used on his commercial illustration work and was a reference to a fake Pop art group that Powers created called "Lazarus Organization," featuring such imaginary creators as "Lemming Legal Phleeble."

Overall, I thought Six-Gun Planet was a great book that satisfied both the western and sci-fi fan in me, with the perfect balance between the humorous and more serious sides of the story.
at August 11, 2020