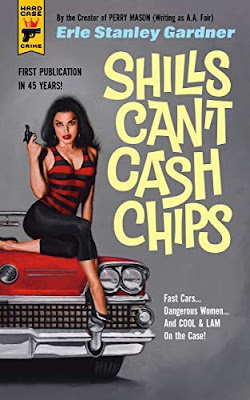 While HBO has been busy reviving (and unnecessarily retooling) Perry Mason, Hard Case Crime has been busy reviving one of Gardner's other beloved series, the Cool & Lam mysteries, originally published under the pen-name A.A. Fair. A little hardboiled, a little screwball, the Cool & Lam books are a lot of fun, and Hard Case's most recent reissue, Shills Can't Cash Chips, is just utterly delightful. And, in true Hard Case tradition, this new edition also sports fabulous new cover art by Laurel Blechman.
If you're new to this classic private eye series, feel free to jump right in with this one. Bertha Cool tells you all you need to know at the beginning: "I handle the financial end of the business. He supervises the outdoor work." Bertha Cool is the boss and Donald Lam takes the punches—quite literally, as Lam isn't your typical hardboiled detective, and he often prefers to get hit and fall down. Sometimes it's just easier to get it over and done with. "I saw the blow coming but didn't try to dodge. The next one would have caught me anyway. I stood there and took it."

Shills Can't Cash Chips was originally published in 1961. In this book, Cool hands Lam what she considers a safe, respectable case—following up on an insurance claim. Real estate mogul Carter J. Holgate supposedly rear-ended divorcee Vivian Deshler's car. Holgate has admitted that the accident is his fault, which puts the insurance company on the line. They want Lam to look into the lady's claim. Posing as a car thief, Lam tries to con his way into a friendship with Deshler's friend and neighbor, Doris Ashley, but soon suspects that he's the one being conned when he's hired to provide false alibi to the accident. It seems that everybody involved in the accident wants him to corroborate the story—but Lam can't figure the angle. And then a body turns up, and Lam's on the line for murder. So much for Cool's dreams of respectability. 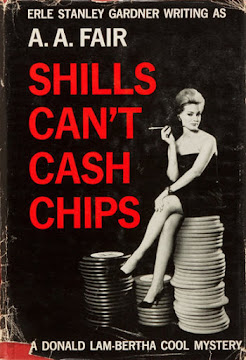 Gardner must have been hungry when he wrote Shills Can't Cash Chips, because some of the most memorable moments are choreographed around food. First Lam meets Doris at a grocery store, then she seduces him with steak. Next, Lam instructs his secretary, Elsie, to have a steak ready for him while he meets a person-of-interest in the case. Later, Doris again seduces Lam with bacon. And then the police interrupt a witness's chicken dinner in order to i.d. a corpse. "Well, heavens; I've got this chicken in the rotisserie..." Justice comes before dinner, but not before Gardner reassures readers that the witness will turn off the heat and finish cooking it later, and that "it won't affect the flavor too much."

Are these foodie details essential to the mystery? Not at all. But are they essential to the tone of the book? Absolutely. Gardner is such a charming writer, he reconstructs a doozy of a whodunit with such ease and finesse that he even has time for digressions about cooked meat fantasies. Four decades into his career (his first published story was in 1921), Gardner was by this point an undisputed master of mystery, and he proves it in Shills Can't Cash Chips. Gardner's plot twists and turns seem so graceful and effortless, his mastery of puzzle and pacing is a marvel to behold. Gardner is so smart that he's always one step ahead of you, but it's an absolute joy trying to catch up to him.

Shills Can't Cash Chips was the 22nd Cool & Lam mystery. Hard Case first began reissuing the series with Top of the Heap (1952) way back in October 2004, when it was only their third paperback. It took a while for them to return to Gardner, but they did in 2016 with The Knife Slipped (an unpublished originally written in 1939), followed by Turn on the Heat (1940), and The Count of 9 (1958). Shills Can't Cash Chips marks Hard Case's fifth—and reportedly final—volume. Hard Case head honcho Charles Ardai originally wanted to represent one book from each decade of Cool & Lam's books, which lasted form 1939—1970 and encompassed 30 volumes. Hard Case have completed the mission they set out to do, and with Shills Can't Cash Chips they're going out on a high note. It's so good I wish they'd keep reissuing more of the Cool & Lam books. Thankfully, there's twenty-five more books out there, plenty more for collectors out there to find, and plenty more in case Hard Case ever decides to call on Cool & Lam again.