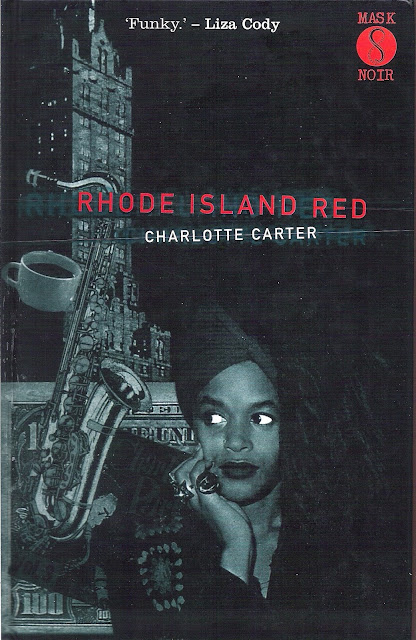 If you ask me, Rhode Island Red is a modern noir classic, and I can't imagine leaving it off any list of my favorite crime novels, and it should certainly be high on any list of Best American noir of the 1990s. Originally published in 1997 in the UK by Serpent's Tail, it was the debut novel of Charlotte Carter, a Black poet-turned-noir scribe, and the introduction to her series character Nanette Hayes, a young Black woman living in New York City who plays saxophone on street corners to pay the rent and aspires to be a Baudelaire translator. After she lets a down-on-his-luck street musician crash at her place, Nan's whole life changes. She wakes up in the middle of the night to find him murdered in her apartment with an NYPD badge by his feet and $60,000 of cash stuffed into her saxophone. Not wanting to tell the cops about the money, she decides to find the deceased's girlfriend to give her some of the money (while keeping some for herself and her mom), a search that lands her dead center of a series of murders that all center around the elusive "Rhode Island Red." Nanette doesn't even know what "Rhode Island Red" is—except that every time she opens her mouth about it, somebody wants to shut her up permanently.

An investigation to decipher dying last words and to find a sacred object, with each chapter titled after a different Thelonius Monk song, Rhode Island Red unfolds like a riff on Citizen Kane and The Maltese Falcon set to a bebop soundtrack. Or, as Nan herself says, "This had all the elements of a film student's low budget homage to Godard—a saintly blind girl; a carful of killers; a brutal policeman and a cast of doppelgängers. Everybody had been leading a double life. There were two Sigs, two Wild Bills, two Henrys. I had tried to get them all out of my mind and my heart, but they just would not stay dead for me. Back they came, like a song."

Nanette is anything but your typical mystery protagonist. She's cool and she's chic—she knows movies and music—but she's also a broke grad student lying to her mom about having a job while she spends her time studying the jazz greats. She and her boyfriend break up and get back together more than she'd like. She's frank and bold as self-reliant and tough as a true New Yorker is. In short, Nanette's real and I believe her every word and action. Part of what makes her character so convincing is the way she responds to the mystery as it unfolds. She's not itching to be a detective and doesn't throw herself in harm's way for a thrill. Instead, in true noir fashion, she makes one mistake after another and keeps trying to dig herself out a hole that she dug for herself. "If I only played the sax half as well as I played the fool," reflects Nanette. Nanette was also part of a new wave of mystery novels of the 1990s, when "Black women began contributing to the genre en masse with novels by Eleanor Taylor Bland, Barbara Neely, Valerie Wilson Wesley, and Grace F. Edwards" as Michael Gonzales writes in a captivating essay on Carter at Catapult Magazine that first turned me on to Carter. 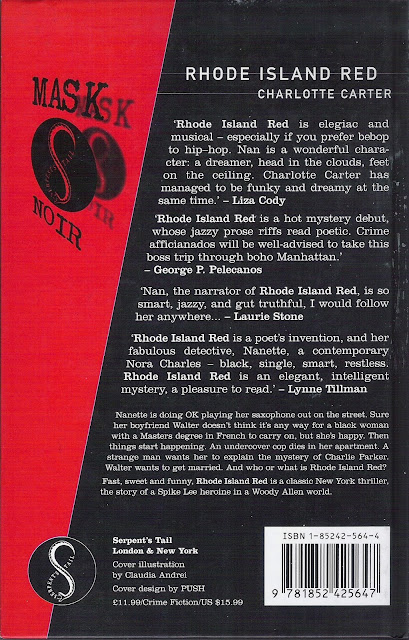 Carter writes noir with the grit of Chester Himes (an early influence) and the gutter of David Goodis. It's hardboiled without the cliches and the charades that can make a novel seem hokey and fake, and more of an exercise in genre mimesis. Every note of Rhode Island Red rings true. Carter's New York feels authentic and lived-in, its streets walked with intimacy and instinct. And like any great portrait of New York written in the present (rather, what was once the present), it shows a world that's already dying. Today, it's hard to imagine Nan's city. She lives in a "floor-through on First Avenue between Seventeenth and Eighteenth. Pretty good morning light. Not too noisy on the front. Furnished in high sharecropper chic." It's the type of apartment that used to be real and affordable, and that, in 2020, one can only dream about and sigh.

Music is more than just a motif that runs throughout Rhode Island Red, it's the lifeblood of its characters, their raison d'etre, their soundtrack. It's what pays Nan's bills. It's what brings characters together, through street corner conversations and sidewalk jams. It's the aphrodisiac for Nan's fling with Henry, a stranger who hears her playing horn and sends her flowers. It's also a vessel for a fleeting history that is preserved through notes that disappear as soon as they're played. Nan may be playing amateur sleuth part of the time, but she's also a historian, tracking down once-promising jazz musicians who now live in flop houses, and searching for answers to decades-old fables about Charlie Parker. As she muses about Ben Webster and other sax legends, she is forging connections to a history that is fast fading from the city around her.

Carter continued Nanette's story in Coq au Vin and Drumsticks, and Carter's other books include the Cook County series (Jackson Park and Trip Wire), and the stand-alone Walking Bones. I've already obtained a couple more of her novels and I'll be reading those very soon.

Posted by Cullen Gallagher at 7:51 AM