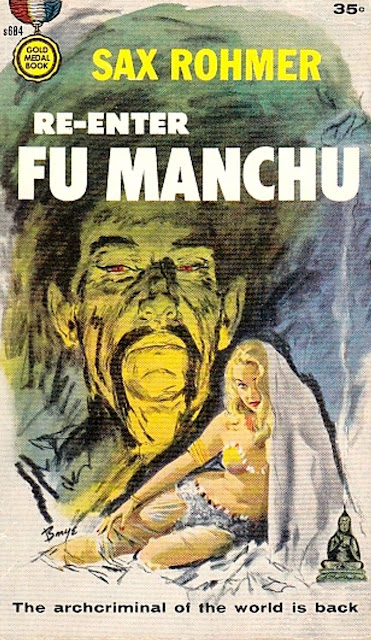 After five successful Sumuru books published with Gold Medal, Sax Rohmer revived his most iconic character, the fiendish Fu Manchu. Forty-five years after the arch villain's first appearance in print, he made his paperback original debut in the fittingly titled Re-Enter Fu Manchu (1957). It had been almost a decade since the character's last appearance in 1948's Shadow of Fu Manchu. Rohmer returns to comfortable territory, revisiting old characters and old formulas, with a few modern twists thrown in to keep things contemporary.

The 12th novel in the series begins with the diabolical doctor's anti-aging serum has gone missing and he must find it in order to carry out his plans. Meanwhile, Brian Merrick, the son of an American senator, is temporarily staying in London before reporting back to the states. In the interim, his Lola Erskine, a fashion designer, suggests he respond to a job advertisement seeking an assistant for Sir Denis Nayland Smith, who happens to be an old family friend of the Merricks (and who readers of the series will remember as Fu Manchu's nemesis). The job sends young Merrick to Cairo where he quickly finds himself enmeshed in a plot that involves a scientist, Dr. Hessian, who was smuggled out from behind the Iron Curtain and who has been working on a device that will protect countries from guided missile attacks. Merrick and Smith must get Hessian to the United States for an important meeting with the president before Fu Manchu can get the doctor and his plans for the Chinese government. 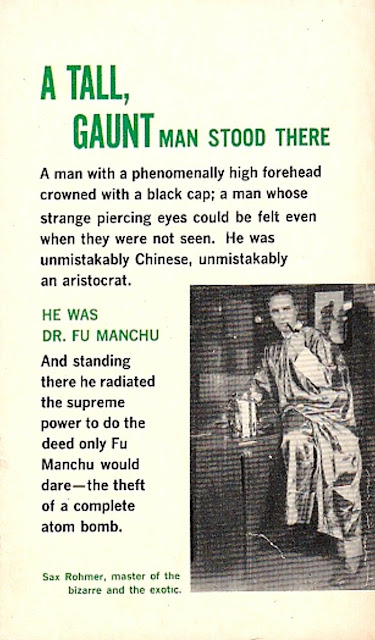 I feel about Re-Enter Fu Manchu much like I felt about Rohmer's first Gold Medal paperback, Nude in Mink: more of a fascinating historical object rather than an enduring piece of great literature. With its naive protagonist in a foreign land surrounded by double agents and lookalikes and following a mystery he knows almost nothing about, Re-Enter Fu Manchu is a perfect example of a classic mystery plot design that Sax Rohmer helped shape and influence. His brand of exotic intrigue defined an era and entertained countless readers for decades. But the hallmarks of Rohmer are as influential as they are dated: Fu Manchu may have set the standard for arch villainy in literature, but the Orientalism and racism in the writing is highly problematic and should be viewed both critically and contextually. What's particularly fascinating contextually about Re-Enter Fu Manchu is that it finds Rohmer updating an early-twentieth century narrative model for the Cold War era, "yellow peril" meets "red scare." In this way, the novel feels like a time machine, representing two different literary and political eras at the same time. I also think it is interesting that even though Fu Manchu is working for the Chinese government, even he has to clarify that he is anti-communist: “You may address me either as Excellency or as Doctor. Comrade—no! I have offered my services—at my own price—to your masters. This does not mean that I kneel at the shrine of Karl Marx." 10 years earlier, in the pages of The New Yorker, Rohmer was already speaking of Fu Manchu's political shift: "He's still villainous and unscrupulous, but he's flat out against the Communists and trying to help democracy. In the old days, you know, he was all for personal power" (The New Yorker, "The Doctor's Blade," November 29, 1947).

A specter of death hangs over Re-Enter Fu Manchu right from its early pages, when Fu Manchu is in dire need of his anti-aging serum. It's a fitting way to re-introduce a character who had been absent from print for nearly a decade, and who had been terrorizing the world for nearly half a century. But there's also something elegiac about it, the way that even Fu Manchu knows that he isn't immortal, and that his time may be soon coming to an end. It suggests that its author, too, knows that he is nearing the end of his life.