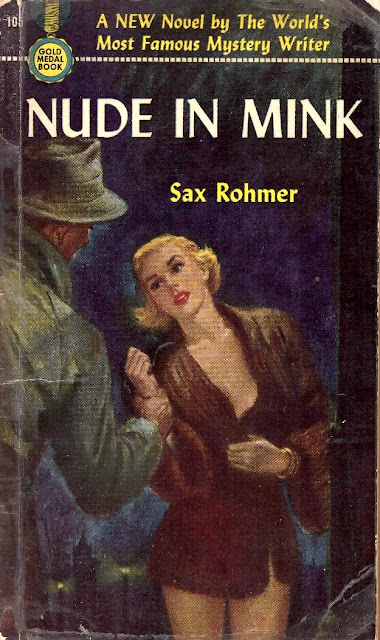 In 1950, Gold Medal was still a nascent publishing imprint looking to get a foothold on the paperback market; as the first outfit to specialize in originals, they were forging a new path and betting on success. Though their parent company, Fawcett, controlled newsstands, Gold Medal still needed big hits to establish their name and make their mark on the field. So, it's easy to see why they decided to work with Sax Rohmer, the British writer who had been a hit ever since his Fu Manchu series debuted in 1912. One can imagine, too, that Rohmer—whose work had been popular in novel form, as serialized in the pages of pulps and magazines like Collier's, on radio, and on the big screen—would want to conquer this new medium of paperback originals, as well. It seemed like a perfect match between author and publisher—and the bet paid off. Big.

Sax Rohmer's Nude in Mink (released as Sins of Sumuru in the UK) was published in May 1950. It was Gold Medal's seventh overall title, and their third fiction novel. Like the Fu Manchu series, it featured a series villain, Sumuru, that was molded to be a female version of her male predecessor. In the first two months, Nude in Mink went through three printings—at 200,000 copies per print run (assuming it followed Gold Medal's usual publishing pattern), that means 600,000 copies in just 60 days. According to The Page of Fu Manchu, it would go through another printing in October 1950, followed by a fifth printing in October 1951 and then a sixth in July 1953. Not bad for a novel that was salvaged from a BBC radio serial from 1945–1946. It would also spawn several sequels: Sumuru (1951), The Fire Goddess (1952), Return of Sumuru (1954), and Sinister Madonna (1956), as well as several movie adaptations. (Thanks to The Page of Fu Manchu for such a detailed publication history of the series.)

The story of Nude in Mink is about Mark Donovan, an American journalist staying in London, whose evening is interrupted when a mysterious young woman barges into his rented apartment wearing nothing but a mink coat. She claims the apartment belongs to her aunt but rushes out into night before he can learn more about her. Soon, both of them are caught up in the fiendish web of arch villain Sumuru, a woman who uses her book, Tears of Our Lady, to lure other young women into her cult. Claudette is taken hostage, and it is up to Donovan and British secret service agent Dr. Steel Maitland to save her and stop Sumuru from achieving her goal of power.

To me, Nude in Mink holds more interest as a historical object, and for the context in which it was created, than as an enduring piece of literature. It's language is creaky and archaic, reminiscent of pulps from decades past, and is very much at odds with the sort of more gritty, hardboiled mysteries that Gold Medal was publishing at the same time. 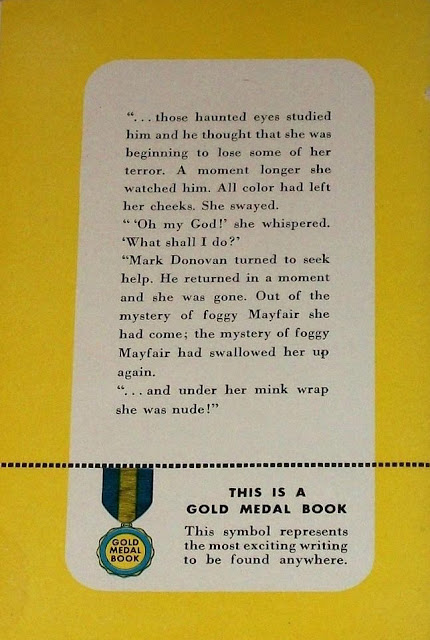 Nude in Mink's plot is incoherent and not fleshed out, with more emphasis on talk than action. In this way, its radio roots are distractingly apparent, with dialog interspersed with descriptions of atmosphere and sound that a radio narrator might speak. Compared to Rohmer's Re-Enter Fu Manchu, released by Gold Medal in 1957, Nude in Mink feels sketchy and unedited at parts, as though it were rushed into production, and it lacks the polish and professionalism of the later novel. It's structure, with each chapter broken down into four sub-sections, seems to be written with serialization in mind, which hinders the development of scenes by speeding through them or ending them preemptively. (The radio show was serialized over the air, however, to my knowledge, the book never was serialized in print.)

Another problem I had with the novel is that Sumuru's ultimate goal is not all that clear, and that's why—despite kidnapping and murdering—she doesn't feel like that much of a threat. All we know is that she wants power, she despises fascism and the nuclear bomb, and thinks that male leaders have not done a great job. From the following description, it seems the book is more scared of women in power than any of her political beliefs or criminal ways.

"Sumuru was an idealist of sorts. She despised dictators and dictatorships—apparently because they were what she called 'ugly.' She condemned war. She believed, according to available evidence, that she had some super-plan to exile war for ever. Her crimes of violence were presumably directed, and directed exclusively, against those who sought to interfere with the development of this super-plan. Yet what did it all boil down to, unless to a new dictatorship—a dictatorship of women? Would the world of selected beauty envisaged by Sumuru be a better world to live in than those of Franco? ... of Stalin? ... of Attlee? From his own personal point of view, Donovan doubted it."

Even by 1950, Sumuru's menace seems old fashioned and hackneyed, and is more suggestive of the type of crime fiction that Rohmer helped popularize in the first half of the twentieth century and that would be replaced by Gold Medal's hardboiled renaissance of the 1950s. But while Nude in Mink might not be a good novel, it is nonetheless a fascinating piece of literary history, the intersection of two popular literary formats—pulps and paperbacks—and of two arch-villains—Fu Manchu and Sumuru.