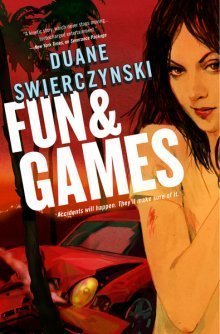 Duane Swierczynski is the Wile E. Coyote of crime fiction. His novels are filled with chases, explosions, and, amidst all the mayhem, a dash of philosophy about the absurdity of existence. His first novel, Secret Dead Men, appeared in January 2005 from the small but solid indie publisher Point Blank Press, but it was his follow-up in October of that same year that announced his arrival with a big kaboom. The Wheelman is about a mute Irish getaway man, who blacks out after a heist goes sour and wakes up in a body bag that some musicians are trying to dump down a Jersey drain pipe. From there, things only get worse (for him) and better (for us). The book is violent, twisted, and frequently funny as hell, yet its characters are strangely endearing. They're capable of the most brutal acts, but are also incompetent, entirely human, and believable. That's the Swierczynski touch: he makes apeshit chaos seem par for the course.

Swierczynski's latest novel is Fun & Games, and it's 100% Acme approved. This first volume in a trilogy introduces us to Charlie Hardie, an ex-cop-turned-housesitter whose latest job embroils him in a Hollywood assassination attempt by "The Accident People." Their latest target: Lane Madden, a B-list action actress who knows something she shouldn't. From its opening high-speed chase along the Decker Canyon Road, to the tense cat-and-mouse pursuit through the Hollywood Hills, to the epic, bloody finale, this book shows Swierczynski at his pulpy and imaginative best.

One of the book's main joys is its bad guys, The Accident People, who suggest the influence of Sax Rohmer's Fu Manchu by way of Ian Fleming's Dr. No, only funnier, and gorier. They are classic arch villains, armed with the technology of tomorrow and the ineptitude of sitcom spies. Swierczynski specializes in such mélanges of pop culture tendencies. A deep knowledge and appreciation of movies, literature, music, and true crime runs through all of his novels, and Fun & Games is no exception. The chapters are graced by cultural litanies, ranging from environmentalist Marc Reisner to critic Geoffrey O'Brien, and from Hickey & Boggs to Anchorman. In this way, Swierczynski emerges as one of the genre's leading post-modernists, playfully tweaking the history of crime fiction as he drives it into the future. With Fun & Games, Swierczynski has pushed his style to its farthest extreme yet, and from the looks of things, the rest of the trilogy is going to go even further; he has the chops pull it off like the perfect heist.

This review was originally published at the Los Angeles Review of Books on September 17, 2011. It appears here in a slightly revised form.