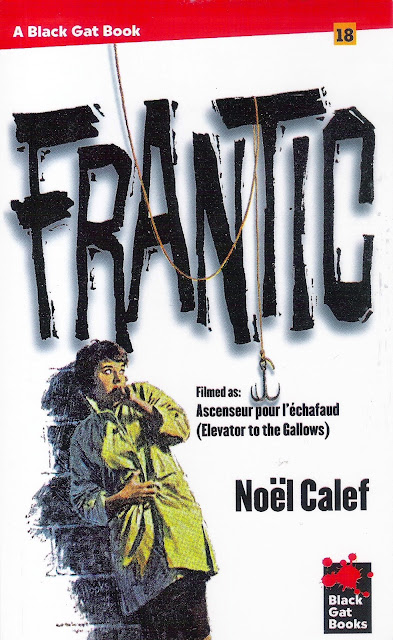 Noël Calef's Frantic is certainly a well-deserved title, even if it is an inaccurate translation. How else can you describe a book about a man trapped in an elevator, who was trying to cover up a murder, while outside his whole world is falling apart and events are set in motion to blame him for another murder which he did not commit? It is a brutally bleak and misanthropic noir structured as Greek tragedy, enacted by a despicable cast of characters care only for themselves and whose selfishness leads to their own downfall. In true noir fashion, this is a book where no one gets away clean.

Frantic was originally published in France in 1958 as Ascenseur pour l'échafaud and filmed that same year by Louis Malle. Three years later, in 1961, both the book and the movie were released in the United States under the title Frantic, with the book being released by the king of paperback crime publishers, Fawcett's Gold Medal Books. While the movie, better known under the more accurate translation of Elevator to the Gallows, is a celebrated film noir masterpiece, the book's English translation has been out of print for nearly sixty years; however, it was raised from obscurity by Stark House Press in 2019 and released as a Black Gat Book.

The book begins with Julien Courtois in his office. His wife, Genevieve, calls, inflamed with jealousy and paranoid that he is having an affair. He agrees to call her back. He asks his secretary, Denise, not to until 6:20. At that point he closes his door, takes out his grappling hook and gun, goes out his window, and climbs up to the next floor to murder Bordgris, a loan shark to whom he owes more than he can repay. Everything goes according to plan until he starts his car and realizes that the grappling hook is still hanging from balcony. He leaves his car running and rushes into the building and gets into the elevator when, unexpectedly, the janitor cuts the power to the building and locks the doors for the weekend. Julien is stuck. Meanwhile, outside, two young lovers, Fred and Theresa, steal Julien's car and find his gun. During their getaway, Genevieve sees the car and the young woman and thinks that her husband is running off with her. This sets off a chain reaction of events that leads to the ruin of all parties involved—broken homes, shattered hearts, destroyed relationships, and murder. 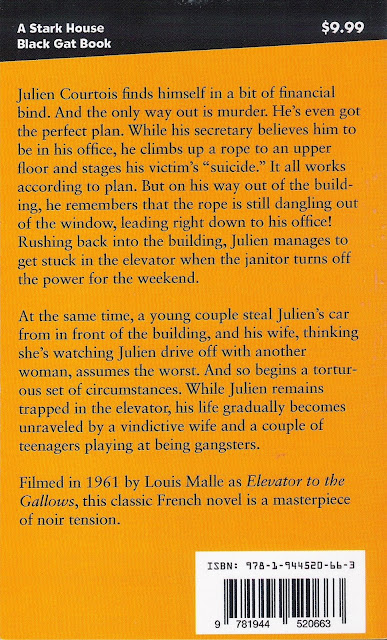 The plot can be seen as a series of intersecting bad relationships: Julien and Genevieve; Fred and Theresa; Denise and her boyfriend Paul; Mathilde and Charles, the couple who run the inn where Fred and Theresa stay overnight; and Germaine and Pedro, the vacationing couple who are unlucky enough to wander into this domino-like pattern of violence. They are all toxic relationships, with characters unable—or unwilling—to understand what their partners are going through. They lie, they cheat, they hide, they gaslight—it's one unkindness after another. Calef exhibits no pity towards his characters, and he writes them in exceedingly acerbic strokes.

More than anything, this novel exudes hopelessness. From the moment that Julien exclaims, "It's over! I'm not afraid anymore!" it is evident that his troubles are far from over. Calef never allows his characters even a moment of relief, no one ever thinks they're going to get away with anything, each action only makes their respective graves deeper. As Julien thinks when he is looking down the elevator shaft, "A black, endless, bottomless hole, where his tiny flame cast more shadow than light. He gasped. He knew he'd never make it, he didn't have the physical courage. He threw himself backward, his body shivering in seven directions, with a high, helpless laugh that echoed back from the walls of the pit." The only place to go in Frantic is down.

In an interview with Marc Dambre (originally published in Cahiers des Amis de Roger Nimier 6 in 1989 and later, translated by Hugo Frey, in South Central Review in 2006), Louis Malle related several insight's into his film adaptation of Calef's novel. At the time of the film's release, Malle commented to Francois Truffaut, "The script to Ascenseur pour l’échafaud did not allow anything but an exercise in style. Nimier and I worked and re-worked the novel in every possible way before arriving at the final version. At one time we had strayed a long way from the subject and to the point of ending up with a sort of modern Histoire des Treize [by Balzac]." 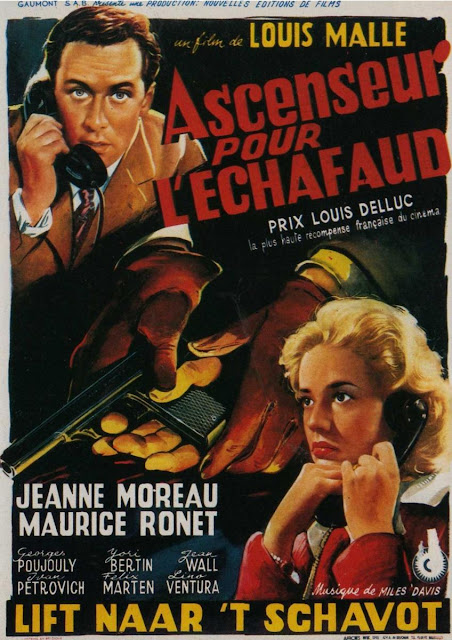 Years later he changed his feelings. "Today, I don’t see Ascenseur as an exercise in style. Rather, I see an ambitious film from a first-time director who wanted to reconcile his contradictory admiration for Bresson and Hitchcock. There was some clumsiness, but it was not too showy as is often the case with first films. Roger had only contempt for the novel. Several times we thought of dropping it completely. And, I remember at one point that it became a conspiracy story, with a secret society, like Balzac’s ‘Thirteen.’ Finally, we came back to the central plot of the novel, the double murder and Julien trapped in his lift, while adding Jeanne Moreau and trying to make the characters more interesting."

Malle and co-writer Roger Nimier's "contempt" for Calef's novel is apparent in their changes. While they keep Calef's plot design they streamline it greatly and also show much more pathos towards the characters. Julien (played by Maurice Ronet) commits murder, but it is a crime of passion and of revenge, because his victim is not a loan shark but Simon Carala, a war profiteer and arms dealer. Genevieve is no longer Julien's jealous wife but his lover, Florence Carala (Jeanne Moreau). The young lovers are still part of the plan, however Fred's murder is motivated by folly rather than bigotry, and Theresa is no longer a symbol of bourgeois domesticity but rather a concerned partner scared for their future together. Many of Calef's subplots—such as Julien's fraud—are eliminated. It allows not only for more space within the movie for atmosphere—such as the beautiful, atmospheric, dialogue-less scenes of Jeanne Moreau walking in rain through Paris streets at night while Miles Davis's score plays over the soundtrack—but it also gives room for the characters to live and breathe and think, and makes them more human and compassionate. Compassion is a common sentiment in Malle's films, and it is heavily apparent right from this early movie. (He refers to it as his first, but technically Malle had co-directed The Silent World with Jacques Cousteau in 1956, which won the Academy Award for Best Documentary, Features.)

Calef was born in Bulgaria in 1907 as Nissim Calef. He studied in Paris and Vienna before relocating to France in the 1930s and changed his first name to "Nöel." During World War II was imprisoned in the Drancy concentration camp and later in Italy at Bardonecchia, Tolentino, and Urbisaglia. After the war, he returned to France to continue writing. He was awarded the Prix du Quai des Orfèvres in 1956 for his novel Échec au porteur. His work was adapted to the screen many times, including Joseph Losey's Stranger on the Prowl (Imbarco a maezzanotte) (1952), Gilles Grangier's Not Delivered (Échec au porteur) (1958) which also starred Jeanne Moreau, J. Lee Thompson's Tiger Bay (1959) starring Hayley Mills, Leslo Benedek's Recourse in Grace (Recours en grace) (1960) starring Raf Vallone and Emmanuelle Riva, and Alberto Lattuada's Unexpected (L'imprevisto) (1961) starring Anouk Aimé and Tomas Milian.

A lost classic source novel for a cinematic masterpiece, I'm thrilled that Frantic is back in print, so that noir fans and film scholars can now more fully understand and appreciate how the beloved film made it to the screen.