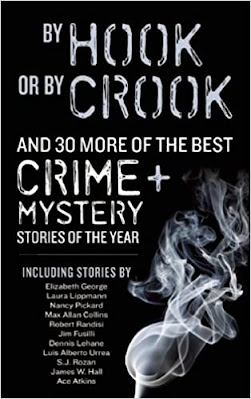 I initially reviewed Ed Gorman and Martin H. Greenberg's By Hook or By Crook, and 30 More of the Best Crime and Mystery Stories of the Year (2010, Tyrus Books) when it was new, and when we could count on new anthologies from its editors every year to highlight a fine array of stories from writers new and old, our favorite writers of today and tomorrow. How I miss those times. Cancer robbed readers of both of them, Greenberg first, in 2011, and Gorman in 2016. There was something comforting and assuring about seeing their names on the spines or book covers—an assurance that you'd be reading truly fine stories. They had impeccable taste and a mind-boggling comprehension and knowledge of fiction. They knew the most obscure stories from decades ago as well as the best stories from emerging writers. Sometimes they'd source stories from the pages of established magazines like Alfred Hitchcock and Ellery Queen Mystery Magazines, but sometimes more recently they'd pull from website and e-zines. Needless to say, their selections were always interesting.

Gorman and Greenberg collaborated for over two decades on anthologies of mystery stories. As anthologists, they were simply tops, and legends in their own respective ways. Gorman was co-founder of Mystery Scene, and an incredible novelist and short story writer in his own right—one of the best, in my opinion, a well-deserved recipient of the Life Achievement Award from the Private Eye Writers of America. Greenberg was a prolific anthologist for mystery, horror, and science-fiction genres, assembling over 1000 anthologies in his career. In addition to winning the Bram Stoker lifetime achievement award from the Horror Writers Association, the Ellery Queen award from the Mystery Writers of America, and the Milford Award for lifetime achievement in science-fiction publishing and editing, Greenberg was also a professor of political science at University of Wisconsin-Green Bay for almost 30 years.

By Hook or By Crook is representative of their best anthologies. It offers a thorough and comprehensive look at their top picks from 2009, ranging from established novelists to then-up-and-coming writers. Laura Lippman—whose novels have won nearly all the major mystery awards (the Edgar, Agatha, Shamus, Nero Wolfe, and Anthony)—gives the archetype of the suffering mother a dark twist in "Cougar," a story about a woman whose life comes to a crossroads when her son converts her house into a meth lab. The late Tom Piccirilli, two-time winner of the International Thriller Writers Award for Best Paperback Original, did some of his best work is in the short form. Less bleak than his then-recent novella The Last Deep Breath, "Blood Sacrifices and the Catatonic Kid" combines a loony-bin jailbreak with a revenge fantasy, and highlights the author's capacity for dark humor. And Anthony- and Derringer-winner Bill Crider's "Pure Pulp" is a delightful and loving tribute to a bygone era: a locked room mystery set amidst a group of pulpwood writers. Crider, too, is gone, having passed in 2018. Gone, too, is Mary Higgins Clark, who is represented by "The Tell-Tale Purr."

Sandra Seamans' "Survival Instincts" (from Pulp Pusher)—about a young girl who hides in the walls of a hotel room while listening to a brutal murder—is a tense, existential snapshot of sudden violence. Sadly, Seamans passed away in 2019. In addition to her stories, many of which were collected in Cold Rifts, she also ran a much beloved blog, My Little Corner, and was a beacon in the crime fiction community.

Greg Bardsley's "Crazy Larry Smells Bacon" (from Plots with Guns) is a psychotic head-scratcher in the best possible way. Bardsley's story is wild, unpredictable, and totally original: Crazy Larry is an eccentric neighbor who likes to play with knives on the front lawn while lathered in cocoa butter and wearing a Speedo, and revenge smells like bacon to him. Another distinguishing highlight is Jon L. Breen's extensive year in review feature, which covers novels, stories, scholarly and reference books, as well as all the award winners; this survey will surely be a boon for future generations of readers and scholars.

Gorman. Greenberg. Crider. Piccirilli. Seamans. Clark. All left a lasting imprint on literature. Revisiting By Hook or By Crook may be more mournful than when it was first published, but the book's excellence has not diminished, and in fact seems an even greater treasure today.

This review was originally published by the Los Angeles Review of Books on June 23, 2011. It appears here in a slightly revised form.