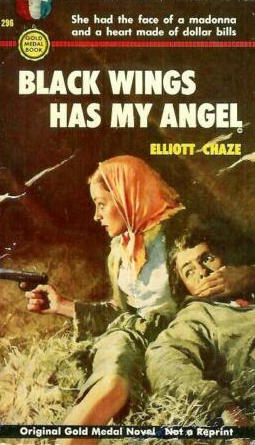 Elliott Chaze's Black Wings Has My Angel was originally published by Gold Medal in 1953. Bill Crider and Ed Gorman have long been touting this as one of Gold Medal's finest crime novels. Gorman calls it "one of THE classic noirs" while Crider admits "I'm probably to blame, at least in part, for the high price that the book commands these days because I praised it in a fanzine article 35 or so years ago." Now that I've read it, I’ll nod my head in agreement: they weren’t kidding. An unorthodox and peculiar heist novel, its protagonists are an oil rigger fresh off a 16-week stint in the Atchafalaya River in Louisiana and a volatile, bloodthirsty call girl. Beginning with their self-loathing meeting in a cheap motel room to their road trip across the Southwest and culminating in a camping expedition in the Colorado mountains, Black Wings Has My Angel often seems like a travelogue of American scenery and squalor. But that's precisely its magnetic appeal: Black Wings Has My Angel is a tantalizing novel that reveals its dark secrets slowly, never letting us in on the grand plan until we’re too far along to back out.

Black Wings Has My Angel shows that Elliott Chaze was among the most formally experimental and narratively audacious authors in the Gold Medal lineup. As the narrator explains:

I’m telling this the way I remember it, and I explained to you before that some of the things that come back to me are little things that stick out of the story like sore thumbs and don’t serve any useful purpose. I’m trying to keep it true to life and real life is not a series of nice interlocking ripples graded for size and fitting into a pattern that can be called off like your ABC’s. It’s a bunch of foolish tiny things that don’t add one way or the other, except that they happened and passed time. 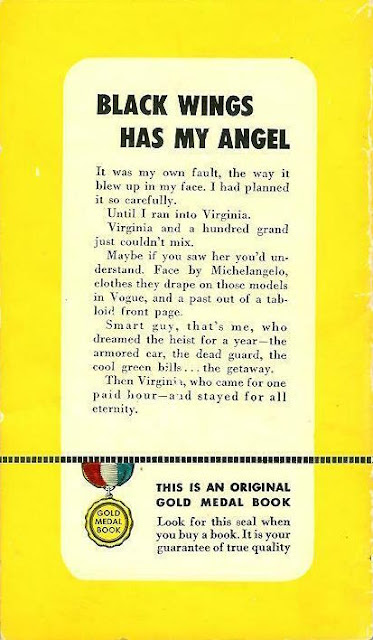 Whether or not they serve any narrative purpose, the details themselves are unforgettable, from a little girl's parking lot parable about how "Jesus went to God and said he wanted to have something to eat, for His own glory," to the narrator's methodical description of being a "power-shear operator, working a wide hydraulic blade that chopped sheet metal the way you cut cheese," the details of which are so rigorously rendered it reminds one of Melville's technical digressions in Moby-Dick. Is it necessary to know the most minute details of whaling to tell Ishmael's story? Probably not, but the story is in the journey, not the destination. The heist, like the battle with the white whale, might be the centerpiece, but it is by no means the main attraction. The chief appeal here is Chaze's unflappable narrative command: the more tense and turbulent the protagonists' crime wave becomes, the cooler and more controlled Chaze's prose becomes. It's an astonishing book, one that deserves to remain permanently in print and to secure a high spot in the crime fiction canon. Currently, the book is available from Stark House Press (accompanied by Bruce Elliott's fabulous One Is a Lonely Number, and with introductions by Ed Gorman and Bill Crider) and the New York Review of Books (featuring an introduction by Barry Gifford).

This review was originally published at the Los Angeles Review of Books on February 10, 2013. It appears here in a slightly revised form.