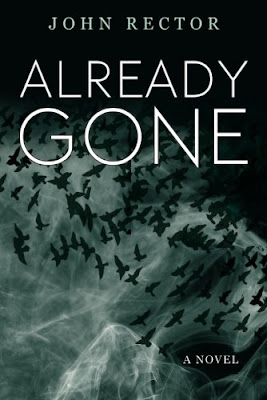 John Rector's Already Gone (2011) begins with a hell of a punch—or rather, with its aftermath: "I put up a good fight." Stepping out of a bar, Jake Reese, a professor of writing, gets the crap kicked out of him by a pair of mysterious thugs. Jake, an ex-con who served jail time for assault, has put his past behind him, and now refuses to call on his underworld contacts to find out who was behind the attack—that is, until his wife goes missing. When the police prove ineffective, he resorts to the person who got him started in crime so many years back. But as he searches his own history for answers to his wife's disappearance, Jake begins to wonder if the answer might not be in her past, instead?

Rector writes hardboiled noir with poetic élan, compressed action, and reticent melancholy. The terse style exhibited in his first two works, The Grove and The Cold Kiss, is taken to an economical extreme in Already Gone. My favorite paragraph is only four words: "The road is dark." Were this just another sentence in a larger paragraph it would easily be lost and quickly forgotten, but Rector gives sentence its own paragraph. To me, these four words sing with Bruen-esque economy. In a way, the line is as simple and obvious as it seems. But part of the beauty is in its minimalism and unfussy phrasing. Rector communicates what he needs to in the most efficient, starkest words possible. And while the line may seem slight, Rector also imbues it with larger metaphoric significance. The road may literally be "dark," as in "unlit," but in the context, that darkness also communicates the narrator's profounder sense of loss and of being lost.

Towards the end of Already Gone, Jake finds himself hiding out in a secluded old house. There, he finds a box full of old paperbacks by Day Keene, Fredric Brown, Ed Lacy, Horace McCoy, James M. Cain—all of them past masters of the hardboiled school of writing. It is in their footsteps that Rector follows, and I feel confident in saying that he is well on his way to joining their ranks. He's already proven himself among the freshest and most stylistically austere voices working in the thriller field. In fact, labeling his books "thrillers" feels too limiting. There's a tonal ambience and doleful vibe that permeates his work, which comes as a surprise, considering how action-packed and tense his narratives tend to be. Acutely visual, Already Gone pulses with cinematic urgency and visceral punch. It's only a matter of time before Hollywood realizes his big-screen potential. The Cold Kiss, his bleak midwinter lovers-on-the-run nightmare, has already been optioned. Its time to get on board, before Rector stops being "the next big thing" and becomes the phenomenon he deserves to be.

This review was originally published by the Los Angeles Review of Books on January 23, 2012. It appears here in a slightly revised form

Posted by Cullen Gallagher at 12:43 PM