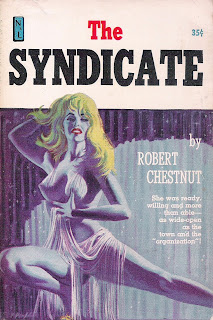 The Syndicate starts on hardboiled overdrive right on page one, and only revs up with each turn of the page. Andy Sorrell, muscle for the New York mob, has just arrived in the "West Coast" city of Hollisworth, in search of three man who ripped off a syndicate bank for half a million dollars. He was told to take care of the men—not to find the money. Sorrell has every intention of killing his marks, but he's also set his sights on taking the loot for himself. While Sorrell's boss, Lou Pulco, had promised him that Hollisworth, a syndicate town, would be cooperative, Sorrell finds himself one step behind someone else who is after the money.


Published in 1960 by Newsstand Library, The Syndicate was written by "Robert Chestnut," a pseudonym of Clarence Cooper, Jr., a pioneering Black author of crime fiction. Cooper was born in Detroit in 1934 and published seven novels before he was found dead of a heroin overdose in the 23rd Street YMCA in New York City in 1978. His widely-acclaimed first novel, The Scene, was also published in 1960, by Crown Publishing, however that book appeared under his real name. The Syndicate's publisher, Newsstand Library, was decidedly more sleazy, a Chicago-based operation best known for publishing Charles Willeford's The Woman Chaser (1960). Other Newsstand titles give you an idea of their market: Fraudulent Broad, Amorous Avenger, Doomed Sinner, Sinful Cowboy, Jambalaya Loverman, Bogus Lover,  Office Playgirl. Clearly, The Syndicate was of a different cut from other Newsstand titles—while it sticks to the two-word title format, it distinguishes itself by using only an article and a noun rather than an adjective and a noun. Joking aside, the lurid element of The Syndicate differentiated from the more serious literary aspirations of Cooper and is one reason why it was released under a pseudonym. Another possible reason for the pseudonym is that, perhaps, The Syndicate could have been written for quick cash, rather than as a literary work. I do not know Newsstand Library's author agreements, but if they are like Gold Medal then they paid authors upfront for a print run rather than based on royalties. Since Crown was a more legitimate publisher, my theory is that they were paying Cooper based on royalties and that either his earnings were slow to come in or that they were lower than anticipated, so he wrote a quickie for the sleaze market. This is only a theory, but it would explain both the pen name as well the sex-and-violence-driven narrative that was characteristic of sleaze paperbacks of this era. 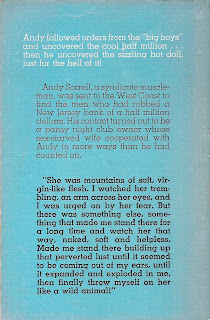 While Cooper delivers on the prurient pleasures promised by the publisher's ill repute, his style is like that of a post-modern Robert Leslie Bellem, that gat-tastic 1930s pulpster whose wild vocabulary delivered hallucinatory scenes of violence and near-dada synonyms for guns and mayhem. Like Bellem, Cooper revels in orgiastic violence mixed with surreal imagery and wordplay. Cooper's indulgence in excess makes even Mickey Spillane look tame. However, Spillane wrote with a certain earnestness—he wasn't without a sense of humor, but one got the sense that Spillane wrote at face-level—and there's something sly and subversive about Cooper, an awareness of what he was writing and what his audience expected. It's like a straight-faced send-up of Spillane-style machismo without the winks and nods of a writer like Richard Prather; instead, Cooper reveals humor through excess, and criticism through his protagonist's blind devotion to his hyper-masculine ways. The protagonist's homophobia (devoted to all three pages of chapter one) and misogyny (devoted to all three pages of chapter two and which appear throughout the book) are amplified through first-person narration, in keeping with the genre's stereotype, but Cooper amplifies them to such an extreme amount that it becomes a sort of critical lens; by making the subtext "text," he reveals the hardboiled masculinity for all of its monstrous, bigoted reality.

As the cliche goes, sometimes a cigar is not just a cigar—and sometimes a gun is not a gun. When Sorrell is sent to meeting with his syndicate contact, a club owner named Brace Lilly, he feels threatened both by Lilly's homosexuality as well as Lilly's armed guards. "I sat, but all the rods made me nervous," Sorrell remarks in first-person narration, however embedded within that statement is Cooper's own estimation of Sorrell's fragile masculinity. It is moments like these that save the book from succumbing to the violent, misogynistic tendencies of its protagonist. One doesn't have to read between the lines to see that Cooper doesn't endorse the behavior and worldview of Sorrell. The same can't be said for Spillane and his series character, Mike Hammer. Even Sorrell is disgusted with himself and his actions: a woman he rapes says she should kill him for what he did, and he says, "I won't argue the point." Hammer never offers such moments of critical transparency. 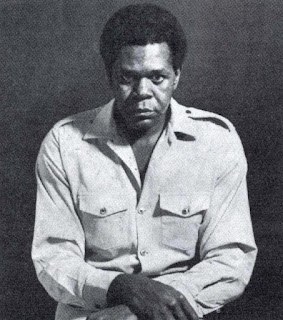 Sorrell's moments of awareness are some of the most interesting aspects of The Syndicate, which otherwise unwinds as expected with Sorrell either shooting, slapping, or screwing everyone he comes across. Even Sorrell remarks that his predilection for sex in the most inopportune of times—such as when numerous parties are trying to kill him—reminds him of a lab experiment in which hungry male rats, when shown a female rat and food, choose the female rat over the food. "What that test proved then, I don't know, but it sure let me see that rats and men have a lot in common. Here I was, about to have my ass scissored, staring down at something that had C'mon sucker written all over it." At times Cooper reminds of Jim Thompson, allowing the mental state of his protagonist to dictate, and at time dominate, the narrative. As the book progresses, Sorrell's pscyho-sexual urges become increasingly dominate—he has so many flashbacks to his deceased lover, as well as his own father, and the sea, that eventually even Sorrell himself thinks he is going crazy. At one point, after being blindsided, Sorrell wakes up in a room with a corpse, a set-up he's supposed to take the fall for. He calls for a doctor to tend to the victim and then makes his escape. Only he doesn't just flee, he has a moment of introspection that belies the casual brutality that characterizes him for much of the novel.

"I stopped before I got half away, crying inside myself, like a baby or something. That feeling was riding me hard again, piggy-backed, with a pair of cold fingers in my eyes.

The the voice started talking, speeded up, like Woody Woodpecker, and it was laughing at me because I didn't have what other folks had, because I was tainted, like a leper, with a curse on my head.
It was no using trying to get around the facts: Something was wrong with me. 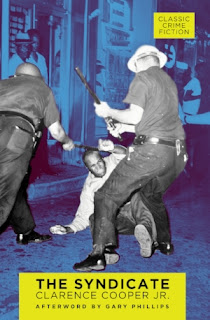 Is Sorrell's machismo an act? Is he covering up for something in his past? Cooper gives hints at what is bothering Sorrell—a dead wife that he still feels connected to, a father he misses and thinks is looking down on him—but Cooper never solidifies these reminiscences. And all the better that he doesn't. There's no easy answer for Sorrell's past, no dimestore psychology that can explain him. These inconsistencies in his behavior, and glimpses into his mental state, make for a much more compelling character, and add a bit of mystery to a mystery novel that, otherwise, holds no real mystery to it.

Republished by Molotov Editions in 2018 (with an afterward by the great Gary Phillips), The Syndicate is an overlooked classic of American noir. "Every goddamn thing in the world was against me," muses Sorrell, "just like it'd always been all my frigging life." Has their ever been a better distillation of the noir ethos than those 18 words? It is these darker undercurrents of The Syndicate that fascinate Domenic Stansberry, author and editor/founder of Molotov Editions (who reprinted the book). In an essay at Crime Reads, Stansberry  calls attention to "the inherent allegorical irony in a story about doomed gangsters—written by a black man hiding his identity from a mostly white audience—a story which nonetheless carried a forbidden charge, an acknowledgement of a fixed system, a character trapped both by his own nature and the fabric of the world; a dark book nonetheless vibrant in its nihilism."
at July 13, 2020