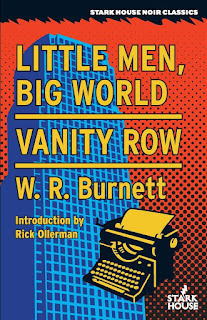 The legacy that W.R. Burnett created has eclipsed is own name. His works were adapted into legendary films such as Little Caesar, Iron Man (three times, twice under its original title and once as Some Blondes are Dangerous), Dark Command, High Sierra (three times, first under its original title and then as Colorado Territory and I Died A Thousand Times), Nobody Lives Forever, Yellow Sky, and The Asphalt Jungle (three times, including a western version called The Badlanders, and Cool Breeze). As a screenwriter, his credits include Scarface, The Beast of the City, This Gun For Hire, Background to Danger, The Racket, Illegal, The Great Escape, and dozens more. Burnett, on the page and on the screen, was an essential component in the formation and iteration of gritty realism in several crime sub-genres, such as gangster, hardboiled, and western noir. Not without a sense of humor, Burnett even provided the hoodlum hokum source material for John Ford’s The Whole Town’s Talking.

All of which makes one wonder: Why is most of his work out of print? The answer is certainly not that his novels don’t hold up. In 2009, Stark House Press reprinted a pair of excellent, forgotten books—It’s Always Four O’Clock and Iron Man, both rise-and-fall narratives of self-destructive ambition, the former about a jazz guitarist the latter about a middleweight boxer. In 2015, Stark House returned to Burnett with another double-header of should-be crime classics: Little Men, Big World and Vanity Row.

In his introduction to this volume, author and invaluable crime fiction scholar Rick Ollerman positions these two novels as part of Burnett’s “Urban Trilogy,” along with 1949’s The Asphalt Jungle. “Each one shows a different facet of crime and the reason for its ultimate downfall, related by the strengths but ultimately the weaknesses of the criminals involved. Hoods are people, Burnett shows us, complex and plagued with the same differences in personalities, the same sins and vices, as everyone else.” The crooks here aren’t villains, but schmucks caught in a bureaucratic system that offers no real chance for success. Good guy or bad, Burnett’s characters are all born to lose. 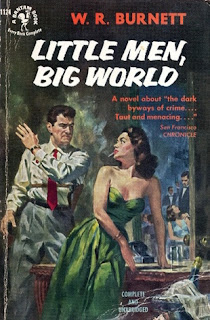 Originally published in 1951, Little Men, Big World is an ensemble narrative of vice and political corruption in an unnamed Midwestern city. At the center of the story is Arky, a bookie whose livelihood is under threat from all sides. There’s a rat in his organization selling out to the Big City boys across the river who want to move in and take over; Ben Reisman, a journalist, is bent on exposing the rackets; and Commissioner Stark wants to run him out of business and clean up the city. It is a book of many mysteries—Who is the informer? Who is the big boss? Who is corrupt and who is on the level? Who will wind up on top and who will fall back into the gutter?—but more than that, it is an exposé of under- and upper-world bureaucracies, the commonalities of their structures, and the ways in which their worlds intersect.

If the urban arena is meant to signify the height of American achievement—where gangsters, reporters, and politicians alike can wield earth-changing influence—in Little Men, Big World Burnett tears the skyscrapers down to one-story stumps. Unlike Horatio Alger and his underdogs, Burnett’s city boys never succeed through hard work and determination. Arky is the most Alger-esque of the bunch, a runaway kid and petty thief who was saved from jail by a benevolent judge. Plucked from the gutter and placed into prominence, Arky well understands the rule of the city: no one gets where they are on their own. From the lowly driver to the high court judge, they were put there for a reason by someone more powerful than them, who was in turn put there by someone even more powerful, and so on up to the top of a never-ending ladder.

The desires of the characters are abstract—Arky, Reisman, and Stark are vying for power and influence, but over who? Certainly, each other, but none have any tangible, clearly defined goal in sight. Arky seems caught in an ever-changing game of chess, shifting people’s positions and moving locations but never making any actual change. Stark wants to wipe out graft, when by his own admission, “as long as men want to gamble, there will be gambling an army couldn’t stop.” Reisman has risen from beat reporter to syndicated columnist, yet he is now “bored, depressed, at loose ends … he’d really hit bottom.” And what does his career even matter when he suffers from a potentially life-threatening ulcer? Burnett undercuts their ambitions by emphasizing the futility of their visions.

More than just a “crime doesn’t pay” parable, Little Men, Big World projects such a deeply cyncial worldview that even antiheroes can’t be celebrated. Burnett humanizes his pawns before utterly humiliating them. Arky might control the local rackets, but when his girlfriend brings her infant niece into the house, he finds himself emasculated and powerless; Arky’s thuggish driver, Turkey, is made to wear and apron and struggle to cook breakfast as part of his duties; Stark cleans up the underworld but he’s so unworldly not to recognize the ulterior motives behind his own promotion; and Reisman, whose ulcer bookends the novel, is the biggest fool of all for thinking he has made a change in the world when really nothing has changed, he’s only one step closer to death. 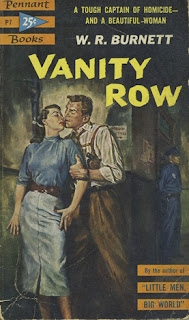 Vanity Row, Burnett’s follow-up in 1952, seems very pedestrian on the surface. Police Captain Roy Hargis is investigating the death of a big shot lawyer, and both his superiors and the underworld are putting the pressure on him to pin the murder on the lawyer’s mistress, Ilona Vance, who naturally Hargis falls in love with and believes is innocent. These broad narratives strokes were nothing extraordinary at the time, and are even less so now, but the significance of Vanity Row lies not in its formula but in Burnett’s politically-rooted skepticism of such archetypes. Hargis is another of Burnett’s corporate cogs, placed into power by a character euphemistically referred to as the “big political boss.” Hargis’s unmerited advancement was so he could be used to circumvent official procedure and cut through red tape. Living in a swank hotel and accepting “favors,” Hargis more closely resembles a gangster than a cop, a division made even more complicated by Hargis’ earnest (and naïve) ambition to be a righteous hero. Burnett’s cynical worldview, however, doesn’t allow for such easy chivalry: In a world in which there is no clear line between good and bad, or right and wrong, how can you know which side you are truly on?

As the investigation gets deeper and more dangerous, Hargis futilely puts his career and life on the line to absolve Ilona Vance. Subverting the traditional moral balance of crime novels, the revelation of truth in the final chapters does not set everything right. Justice, in Burnett’s world, is never just: it is a political tool, like money, influence, and power, and it is inherently corrupt.

As a social documentarian, Burnett offers a fascinating and morally ambiguous counterpoint to contemporaneous procedurals like Dragnet. He doesn’t view crime as a battle between cops and robbers, and forensics aren’t a literary tool to piece together an incomplete narrative. Instead, Burnett posits cops and robbers as complements in a fluid structure with no clear diving line, and police methodology not a means to a truthful, more complete narrative but just an added layer of and adulterated facts and obscured certitudes. In Little Men, Big World and Vanity Row, the mysteries might be solved, but the real problems still remain.

This review was originally published at The Life Sentence on October 12, 2015. It appears here in a slightly revised form.