"Gunshots in Another Room: The Forgotten Life of Dan J. Marlowe" (2012) by Charles Kelly 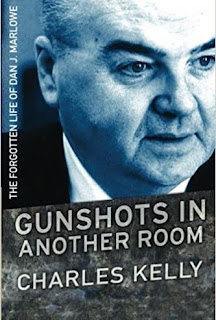 The profession of "paperback writer" is as romanticized, mythological, and distorted as any of the heroes and villains from those aged pulp pages. All too often they’re thought of as overpaid hacks, banging out novel after novel, yarn after yarn, raking in dough without concern for their words, without insight into their topics. Gunshots in Another Room: The Forgotten Life of Dan J. Marlowe (2012), Charles Kelly’s groundbreaking biography of Dan J. Marlowe, a writer best known for his crime novels for Gold Medal—the first and most important of the paperback original publishers during its renaissance from the late 1940s through the mid-1970s—should act as a corrective to many of those rumors.
Marlowe’s life behind the typewriter was as dramatic and exciting as any of the criminal kinds that passed through his pages. Born in 1914, he studied accounting in school, mysteriously avoided service in World War II, spent most of his 20s floating from odd job to odd job, and squandered most of his money gambling. “He’d traveled the fringes of society and came naturally to the hardboiled style,” explains biographer Kelly. Marlowe married at age 31, but was a widower by age 42. Hitting the bottle hard, he drifted, and wound up in New York City where he decided to plunge headfirst into the booming paperback industry. 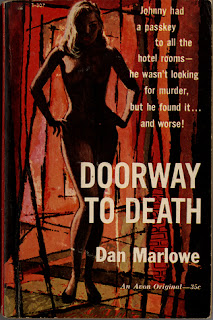 Just as ebooks and self-publishing today are challenging traditional modes of publishing and fighting off claims of illegitimacy and other pretentious prejudices, paperback originals were viewed with suspicion and disgust when they hit newsstands back when Gold Medal printed their first book in 1949. Circumventing the traditional hardcover-to-paperback reprint route, Gold Medal decided to buck the system and produce original paperback novels. Newspapers rarely reviewed them in great depth, if at all. The public, however, loved them. Other publishers followed suit, and a new industry was born (replacing the recently dilapidated pulp field). And it was this new publishing avenue that gave Marlowe a shot in 1959 with his debut novel, Doorway to Death (Avon).
Marlowe’s life took an unexpected turn with his seventh novel in just three years, The Name of the Game Is Death (Gold Medal, 1962). The most popular and critically acclaimed novel of his career up to that point, it won the author many new admirers, including an aspiring young novelist living in Philadelphia. Phone calls and letters were exchanged, nothing out of the ordinary. And then Marlowe, renting a room in a widow’s house in small town Harbor Beach, Michigan, received a visit from the FBI. That aspiring novelist, it turned out, was one of America’s Most Wanted: real life bank robber Al Nussbaum. Nussbaum was eventually caught and served jail time, but he and Marlowe continued to correspond, with Marlowe helping Nussbaum hone his prose, and eventually selling his stories to various magazines. Theirs was a symbiotic relationship: Marlowe shepherding Nussbaum’s career, Nussbaum feeding Marlowe information from his own criminal life. 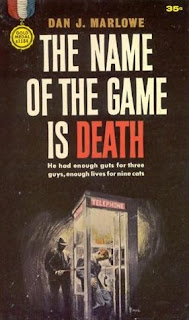 Nussbaum would not be the dramatic peak to Marlowe’s career. What followed was a hard two-and-a-half decade fall from grace before winding up dead, forgotten, and out-of-print. Along the way there were creative rivalries with uncredited researchers, battles with editors, amnesia, more run-ins with the feds, and the crash of the paperback industry. Changing trends in publishing killed the careers of the writers who gave birth to that industry just a couple decades earlier. Jim Thompson, David Goodis, Day Keene, Harry Whittington, Gil Brewer, and many others—including Dan J. Marlowe—suddenly found they could barely make a sale. It was a tragic end to too many careers, an ironically bleak and unjust finale for writers who specialized in noir tales of people, like themselves, whose world crumbled beneath their feet, and who couldn’t stop from falling deeper and deeper into the abyss.
Along with Frank Gruber’s memoir, The Pulp Jungle, and Paul S. Powers’s Pulp Writer: Twenty Years in the American Grub Street, Kelly’s Gunshots In Another Room is one of the few nonfiction books that offer a privileged, intimate look into the professional lives of mid-century popular fiction writers. The toil behind the craft, the anxiety of the industry, and the personal stories of fingers that kept the typewriter clanging long into the night. For anyone interested in the history of crime fiction, or the evolution and devolution of the paperback original industry, Gunshots In Another Room is an indispensable volume.
(This review was originally published February 10, 2013 in the Los Angeles Review of Books. It appears here in a slightly revised form.)

Posted by Cullen Gallagher at 12:57 PM