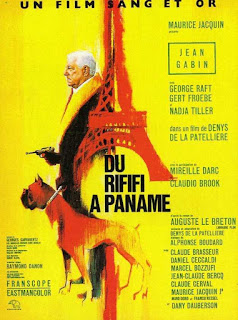 Du rififi à Paname (1966) was the fourth and final of Auguste Le Breton's Rififi books to reach the screen (as of now, that is, a remake of the original Rififi is rumored to be in the works). Running 86 minutes, it's a tight, economical crime thriller. Glittery on the outside—picturesque exteriors from Paris and Tokyo and glamorous interiors from nightclubs—but hardboiled and cold at its core, just as any color film noir should be. Jean Gabin—France's original heartthrob of hardboiled coolness, who was the titular gangster in Pépé le Moko (1937), as well as the doomed antiheroes of Marcel Carne's Port of Shadows (1938) and Daybreak (1939)—and Gert Fröbe (best known as Goldfinger) lead a terrific cast, with lots of colorful bit parts, including a supporting role from one of Hollywood's original gangsters, George Raft, and a cameo from Christa Lang (before her marriage to Samuel Fuller, with whom she later collaborated on many films) as a gangster's moll.

The first Rififi movie, directed in France by blacklisted American ex-pat Jules Dassin in 1955, was based on Le Breton's first novel (Du rififi chez les hommes) originally published in 1951, written in collaboration by Le Breton, Dassin, and René Wheeler. The result was—and remains to this day—the pinnacle of heist movies, a gritty, hardboiled crime thriller set in a ruthless and remorseless criminal underworld. The dialog was sharp, but the action was even sharper—not explosive and flashy, but economical and precise, as professional as the men carrying out the heist. Two more films in the series—linked only by their titles—followed, Riff Raff Girls in 1959 and Rififi in Tokyo in 1963. Many of the books featured the recurring character special agent Mike Coppolano, however he only appears in the final Rififi film, Du rififi à Paname. 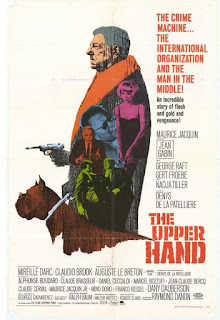 Released eleven years after the original, Du rififi à Paname, distributed in English as The Upper Hand, exchanged the stark, chilly black-and-white photography of Dassin's film for a more dazzlingly and flashy display of colors. Otherwise, the film, written and directed by Denys de La Patellière with dialogue by Alphonse Boudard, sticks close to the cinematic style of the original. In the leading role is Jean Gabin, who plays Paulo les Diams (Paulo Diamonds), a nightclub owner with a lucrative international smuggling operation in consort with antique dealer, Walter (Gert Fröbe), who is selling arms to Cuba. The aging Paulo and Walter must contend with rival gangs trying to muscle in on their territory, as well as an undercover treasury agent trying to infiltrate their organization, and a mob boss, Charles Binnaggio (George Raft) who wants to diminish their operation.

Just what this has to do with Panama, I'm not sure. Paulo trades gold with Japan, Walter sells arms to Cuba, the U.S. sent a treasury agent undercover to Paris, and there are mentions of London and Munich, but never Panama. Maybe it is in the book and got left out of the movie? In the UK and other countries, the film was released as Rififi in Paris, a less confusing geographic title since most of the film takes place in Paris. 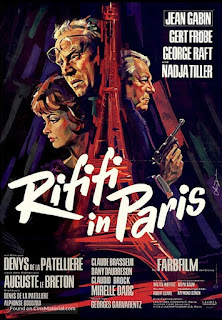 Much of the film deals with the transactional details of Paulo's business: using sex workers to ensnare businessmen to become mules, discussing how to deal with rival gangs, and other bureaucratic meetings. Scenes of violence are handled quickly and without emotion, as though it is just another part of the job. The criminal world of Du rififi à Paname is presented through a capitalistic lens: independents fighting to retain autonomy against a larger syndicate, and businesses competing with each other over the same territory. Every facet of this world, every relationship, and every moment, is an exchange of some sort. Sincerity is alien. Even on his deathbed, a character tries to sway an emotionless wife that he loves her—whether he is trying to convince her or himself is ambiguous, but clearly she understands that their marriage was a business conquest like everything else in the movie.

Rather than romanticizing this world, Du rififi à Paname neither glamorizes nor glorifies either the criminals or the police. The film sympathizes with Paulo's drive for independence, but even he isn't beyond reproach. In one scene, the film presents a slightly Marxist critique of his business, when Walter refers to their practice of using sex workers to manipulate businessmen into smuggling their goods across borders: "Someone like you and me should read statistics. We who exploit human stupidity." It's a seemingly amoral world, with no right or wrong, no justice or injustice, just exploitation, corruption, and annihilation. In this sense, there's a nihilistic worldview to the movie: all that matters is what one can control, and beyond that, there is nothing. 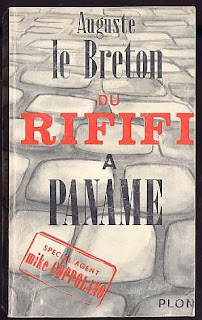 Among the bigger mysteries of the film is the author behind the series: Auguste Le Breton. "I am a wanderer," he said. "I grew up in the gutter and I don't think you can go lower. But I like the great outdoors, cleanliness, in all its forms." The author of 74 novels (according to http://www.auguste-le-breton.com/), only two have ever been translated into English: La lois des rues (1955), translated as The Law of the Streets, and Du rififi a New York (1962), translated as Rififi in New York. Of those 74 are 14 Rififi novels. Born in 1913, he spent his childhood in an orphanage, after escaping several times he was sent to a juvenile prison. Afterwards, he spent time in youth gangs before entering a brief military service. Later, he worked as a manual laborer and an elevator repairman. In the 1940s, he made money as an illegal gambler. During WWII, he was also a member of the Resistance. In the 1950s, he began writing novels, using the language he learned from the streets growing up and his own underworld experiences as inspiration. "I can't invent my heroes, it's flesh and blood. They exist. They take blows. They suffer. And to describe people, I have to get them," he said of his work.

For the moment, Breton will largely remain an enigma for English-language readers. Hopefully in the near-future someone will publish more translation of a prolific author whose work was a seminal part of France's film noir heritage, including not only creating Rififi, but also writing dialogue for Jean-Pierre Melville's Bob le flambeur (1956), and providing the source novel for Henri Verneuil's The Sicilian Clan (1969).