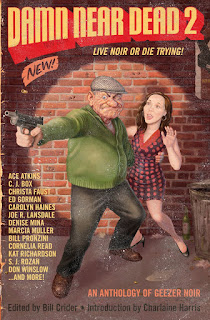 A strikingly unusual anthology is Damn Near Dead 2: Live Noir or Die Trying, a collection of twenty-eight tales in the self-defined niche of "geezer noir." Edited by Bill Crider and published by the small-but-ambitious Houston-based Busted Flush Press, this follow-up to 2006's original Damn Near Dead, manages to avoid the trappings of "gimmick" anthologies. The contributors clearly have fun with the "geezer" theme, but they focus on the story rather than the shtick. Stories range from the satiric—Joe R. Lansdale's pithy "The Old Man in the Motorized Chair," about a grumpy, retired detective who solves crimes between commercial breaks —to the tragic—Ed Gorman's "Flying Solo," about two terminally-ill cancer patients whose turn to violent vigilantism reflects their deeply rooted social and personal discontent. Anthology-opener "Sleep, Creep, Leap" by Patricia Abbott, a clever slow-burner about neighborly good intentions gone wrong, evokes the patient plotting and redolent characterization of Margaret Millar. Gary Phillips' "The Investor" points to new directions in socially conscious crime fiction by fusing classic genre elements - mob corruption and hitmen—with timely economic and environmental concerns. And James Reasoner's "Warning Shot" mixes pathos and action, as a Depression-era night security guard copes with the emotional and tangible consequences of an accidental shooting. Happily, Damn Near Dead 2 does without nursing home pastiche and cranky cane wielders.
This review was originally published at the Los Angeles Review of Books on June 23, 2011. It appears here in a slightly revised form.