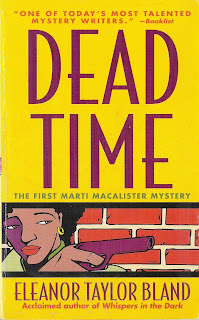 Originally published in 1992, Dead Time is the debut novel of Eleanor Taylor Bland, and the first in her Marti MacAlister series. MacAlister is a police detective and recently widowed mother of two (daughter Joanna and son Theo) who has relocated from Chicago to Lincoln Prairie, IL, a small city of 90,000 (and modeled after Waukegan, IL where Bland lived). As a black woman on the police force, MacAlister battles racism and sexism at work and in the community as she struggles to keep the peace in her town as well as keep her still-grieving family together.
Bland's book was a literary milestone. According to Frankie Y. Bailey's African American Mystery Writers: A Historical and Thematic Study, it marked “the first Black female police detective in a series by an African American mystery writer.” Publisher's Weekly called it “An auspicious debut.” Unfortunately, Dead Time is currently out of print, as is much of the work of this critically-acclaimed novelist, but used copies can be found online.

Dead Time begins with the murder of a woman in her mid-30s at the Cramer, a low-rent hotel. The victim, Lauretta Dorsey, was found dressed in vintage clothing listening to a Victrola. Dorsey was a former Navy physical therapist technician who was diagnosed with schizophrenia before being discharged. Since then, she had led a reclusive life at the Cramer, lonely after the death of her fiancé, Nelson, and shunned by her family because of her mental illness and that she was white and her fiancé had been black. While MacAlister and her partner, Vik, bring in suspects and question family and friends, two orphan children who may have witnessed the crime continue to elude them. But as the murders continue, MacAlister realizes the kids might be the next victims. 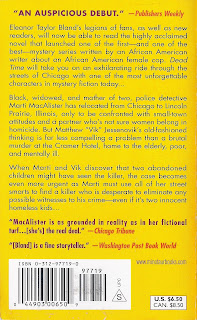 Dead Time is a deftly-written police procedural with a chilly, wintry Midwestern atmosphere, and the Lincoln Prairie setting has both a sense of urban desolation and decay as well as the cozy and at times constricting familiarity of a small city. Bland is an exquisite writer, combining prose that is sharp and to the point—not a word is wasted on unnecessary detail or digressions—with subtler stylistic nuances that quietly reveal moments of great thoughtfulness, despair, and humanity. When MacAlister is on the job, Bland displays an Ed McBain-like eye for professionalism and operation, using sentences that are short and observations that are like bullet-points; and when MacAlister is at home, Bland’s language becomes more languid, giving way to more intimate descriptions of her children as well as more pensive reflections. Bland also manages to be both critical of law enforcement and child services and their deficiencies but also sympathetic to the people like MacAlister in those institutions who are trying to create meaningful change from within, and the pressure they face from their own organizations as well as from the public. It’s both funny and telling that, while chasing a suspect, MacAlister is more scared of her own colleague holding a gun than she is of apprehending an armed suspect. Twenty-eight years after its initial publication, Dead Time’s social insights into race and gender in the United States are still relevant.
Bland, who passed away in 2010 from Gardner's syndrome, has been honored by Sisters in Crime with an award named after her. “The Eleanor Taylor Bland Crime Fiction Writers of Color Award is an annual grant of $2,000 for an emerging writer of color. This grant is intended to support the recipient in crime fiction writing and career development activities. The grantee may choose to use the grant for activities that include workshops, seminars, conferences, and retreats, online courses, and research activities required for completion of the work. An unpublished writer is preferred, however publication of several pieces of short fiction and/or up to two self-published or traditionally published books will not disqualify an applicant.” For more information, please visit Sisters in Crime.

Posted by Cullen Gallagher at 11:35 AM