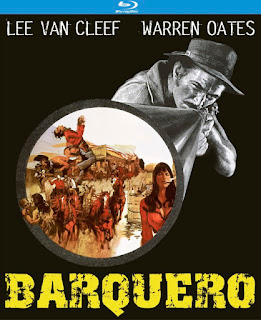 Amidst a genre built on familiar archetypes and recycled tropes, Barquero is all the more striking for its originality and unfamiliarity. With its Mexican border setting and lead actors Lee Van Cleef and Warren Oates, Barquero would seem to follow in the footsteps of Sergio Leone and Sam Peckinpah, however director Gordon Douglas takes us on a very different journey with this film. Van Cleef plays a ferryman along the Rio Grande. When he gets wind that a gang of bandits lead by Oates are on their way, Van Cleef rounds up the townsfolk and heads across the river to prevent the bandits from transporting their guns.

Unlike the journey plots of so many westerns that take advantage of the epic expanses of the landscape, Barquero is structured around the absence of movement. Inaction, rather than action, is the catalytic thrust of the plot. The film is like an extended showdown at high noon, with Van Cleef and Oates facing off against each other across the river, exchanging curses and bullets. They each have hostages, they each have guns, and they each have what the other wants: Oates has the town, and Van Cleef has the barge, and neither man is willing to concede.

Co-written by George Schenck and William Marks, Barquero boasts a clever script that explores one of the most crucial but overlooked aspects of the west: transportation. What do you do when fording the river is not an option, and when there isn't a ferry to get you and your belongings across? It's a simple concept, but Schenck and Marks make the most of it, constructing a steadily intensifying situation that makes for high energy and action, despite the inherently static nature of the plot. Director Gordon Douglas earlier made the underrated Stagecoach remake that infused Ford's classic with updated '60s countercultural spirit, and here he again offers a fresh take on the western genre.

The recently released Kino Lorber Studio Classics Blu Ray boasts a mostly strong image and bold colors. The only weak areas are the day-for-night sequences which can sometimes be quite grainy. Overall, Barquero is great, an innovative, intelligent, and high-action western. It's great to finally have this in a beautiful, anamorphic widescreen edition. This deserves to be on the list of essential 70s American western films.

Available on Blu Ray and DVD from Kino Lorber Studio Classics.
at November 22, 2015