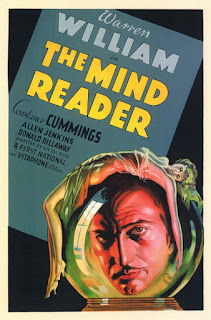 That scoundrel-among-scoundrels Warren William is at his scheming best in The Mind Reader. William plays Chandler, a sideshow swindler who thinks he’s found the perfect racket. Wrapping a towel around his head, he becomes "Chandra the Great." Along with cohort Frank Franklin (Allen Jenkins, one of pre-Codes most endearingly shady character actors), Chandra aims to leave the fairgrounds far behind and conquer high society…as long as an honest woman (Constance Cummings) doesn't un-corrupt him first. Co-writer Wilson Mizner's colorful past (at various times a Klondike prospector, fight manager, robber, gambler, and general con-about-town) spices up the script with the right blend of tall-tale exaggeration and first-hand believability. Director Roy Del Ruth delivers what is arguably his finest picture. Certainly it is his most stylish, with bold lighting designs and copious canted camera angles. But it is Del Ruth's characteristically humanist touch and understanding for the underdog (no matter how crooked) that ultimately distinguishes this picture. Warren William’s "Chandra" stands among the most sympathetic, lovable and fully realized of the pre-Code charlatans.