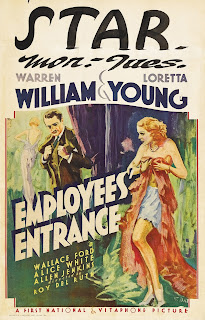 In the grand spectrum of Department Store Cinema, Employees' Entrance (1933) may be less visually fanciful than Julien Duvivier's nightmare of modernity, Au bonheur des dames (1930), but it is undoubtedly the funnier and more charming of the two. That isn't to deny Employees' Entrance its serious side. Director Roy Del Ruth, the unsung hero of pre-Code Warner Brothers, was a master at slipping in socially apt observations in the midst of speedy narratives brimming with snappy dialogue and good-natured humor. Here, Warren William plays Kurt Anderson, a ruthless department store manager who refuses to entrench in the face of the Depression. But after ousting the old-timers and daring to sell men’s undergarments to women customers, Anderson has created a long list of enemies, including the wrath of his rivals, the board of directors, and his contemptuous assistant (Wallace Ford) and his wife (Loretta Young). Del Ruth’s uncompromising temperament balances Williams’ nastiness with Ford and Young’s rom-com roller coaster. In between, careers are crushed, men throw themselves out of windows, and lovers are united. Del Ruth knew that his audiences came to theaters wanting entertainment, and he gave it to them—but he never forgot the real world pressures they faced in their own lives, and that sensitivity adds to the credibility of his characters and narratives.