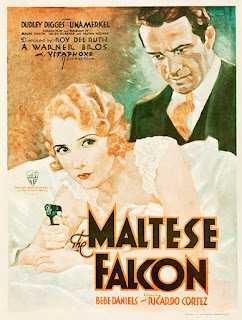 The Maltese Falcon (Roy del Ruth, 1931): Two years after it was first serialized in the pulp pages of Black Mask, Dashiell Hammett’s The Maltese Falcon hit the big screen in this first of three adaptations. Ricardo Cortez stars as Private Eye Sam Spade, whose inquiry into the disappearance of Ruth Wonderly’s (Bebe Daniels) missing sister quickly lands him in a heap of trouble. The cops want to nab Spade for his partner’s murder, Wonderly’s trying to play him for a sap, and a crew of double-dealers are nipping at his heels, all because of some mysterious icon of a black bird. Director Roy Del Ruth emphasizes the libidinous and scandalous pleasures of Hammett’s original story. Unlike the later and more famous performance by Humphrey Bogart, Ricardo Cortez plays Spade like a playboy. With his slicked back hair and a licentious smile, it is clear that this Spade is more interested in the fringe benefits of the fleshy kind than the Falcon. Most strikingly, Cortez’s spade is not homophobic (as in the original text), and he seems to take great pleasure in miming bondage while Joel Cairo searches for the treasure. In keeping with the free-wheeling Pre-Code spirit, Cortez’s Spade scorns the cops, mocks his clients, sleeps with his partner’s wife, strip-searches the ladies, cops every potential feel, and even at the end takes this whole falcon shebang—murder and all—with a grain of salt.