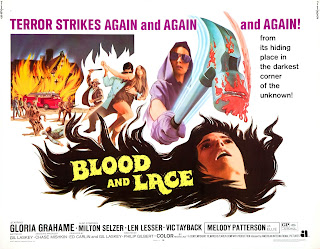 Anthology Film Archives is hosting a several month-long retrospective of the great independent movie company American International Pictures. AIP is virtually synonymous with drive-in fodder, exploitation escapism, and guerrilla film-making tactics that re-wrote the book and produced some incredible talent, ranging from Roger Corman to Martin Scorsese, Peter Bogdanovich, Curtis Harrington, and many, many others.

To kick off the festival, Anthology asked cult cinema maestro William Lustig (director of Maniac, Vigilante, and the Maniac Cop series, and founder of the Blue Underground video label) to pick and introduce a film. His choice? A rarity from the AIP catalog: Blood and Lace (1971), directed by first-and-only-time filmmaker Phillip Gilbert.

The story is about a teenager, Ellie Masters (Melody Patterson) whose mother was a prostitute who was murdered by a hammer. The killer is still on the loose. While the police are investigating, Ellie is placed in an orphanage run by the sadistic Mrs. Deere (Gloria Grahame), who has the tendency to kill any of her children who try to run away and hides their bodies in the freezer along with her deceased husband, who she is keeping on ice until science can revive him. Meanwhile, Ellie has the hots for a young stud who does yard work bare-chested, but her roommate, Bunch, is the jealous and spiteful type who will do anything to keep the boy all to herself. Then there is the lecherous janitor who lures girls into the basement. And then there is that hammer-wielding killer who is still on the loose.

All in all? Hell yeah! Vintage sleazy, low-budget thrills.

But there are also some specific things I like about this movie. 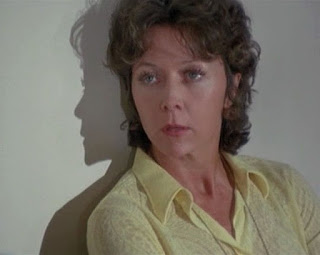 First and foremost, Gloria Grahame. B-movies have long been the place where stars go when their career begins to fade, and that was certainly true in the 60s and 70s when a number of classic Hollywood talent started turning up in horror movies, thanks to the run of "psycho-biddy" films in the wake of What Ever Happened to Baby Jane in 1962. Blood and Lace falls into this boom, and as was often the case, even though the picture might have been beneath the talent of the star, the star still shined. And in Blood and Lace, Gloria is amazing. An original femme fatale, Gloria was never just the sexy bad girl waiting to lure a man to his doom. In movies like In a Lonely Place and Human Desire, there was a real vulnerability to her character, a palpable and desperate need for human connection. But when the time came, as in The Big Heat when she slugged Lee Marvin with the coffee pot, she could be a violent spitfire. In Blood and Lace, she gives a nuanced and subtle performance of an aging widow who is struggling to hold on to her home and business, and will do anything to maintain her sense of control and authority. She obviously has some sexual hangups as she's willing to torture and kill those libidinous teens when their hormones take control. And yet, she's devoted to her husband and the thought that one day medical science will bring him back to her. Gloria is pathetic, pathological, perverse, and psychotic, but it's the combination of all those things that makes her both the film's villain but also its most sympathetic character.

Another thing I like? The opening first-person murder sequence that predates Halloween. The film begins with the camera stalking a suburban house at night, it sneaks inside, pulls a hammer from a drawer, and murders the sleeping victims. It's a shocking opening that grabs and pulls you into the story. 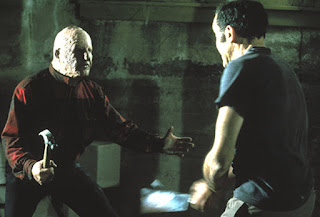 And another thing? Crazy guy with burned face running around with the hammer. Is it all part of Ellie's dreams, or is he really stalking her? Great make-up effects, as the guy looks really freaky.

Structurally, I also like the way the film builds itself around several separate plot impulses. There's the mystery of the initial murder, then there's Ellie's desire to escape from the orphanage and find her real father, then there's Gloria's struggle to hold onto her home, and then all those bodies in the basement, and of course the love triangle with the roommate and the yard boy. With so many different elements at play, it often feels like the film could go off in another direction at any given moment. And when the film finally does conclude, and all the plot strings finally tie up, everything suddenly makes sense. A sick, perverse, and darkly funny sense.