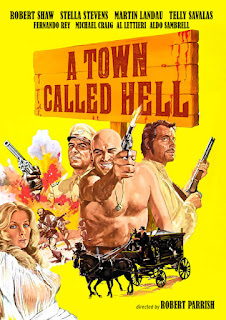 Kino Lorber's Studio Classics has a lot of westerns on their current release slate, but none has been more tantalizing to me than Robert Parrish's A Town Called Hell (aka A Town Called Bastard) (1971). Here's a movie that, unless you saw it in its first release or some mega rare repertory screening, you just couldn't see. That is, you couldn't see properly. Disgustingly butchered public domain dvds and streaming links abound, and they're responsible for killing the reputation of this movie. Most of the reviews up until now are dreadful, and I can't blame the critics, because the prints were unwatchable. My old DVD of A Town Called Hell was not only cropped from widescreen to the square-ish 1:33, but then re-cropped, with the tops and bottoms being cut off to make the already cropped 1:33 look like widescreen. The result was to render the already dull and fuzzy images totally incoherent. I watched the movie like that, but even with the aide of several online synopses, I couldn't make out the story.

Don't judge the movie before you've seen Kino Lorber's beautiful new Blu Ray or DVD, and don't even think about cutting corners for one of the cheapo versions, unless you want to compare to see just how bad the old copies were. And if you were unfortunate enough to watch one of those public domain discs, do yourself a favor and give this film another chance. If you've seen it on any other disc, then you've never seen it before.

A Town Called Hell is a dark, dreamlike western set in Mexico during the revolution. In the opening scenes, an army of rebels overtake a town, killing not only the Republican troops, but also everyone in a church, including the priest. Leading the barrage are two nameless warriors (recognizable as Robert Shaw and Martin Landau). Ten years later, the town is still in rebel hands, ruled by Don Carlos (Telly Savalas). The widow Alvira (Stella Stevens) arrives in town riding in a coffin, from which she rises to announce that she will pay a reward for the man who killed her husband. The culprit is a mysterious revolutionary named Aguila, and the only people who know his true identity are the town priest (Shaw), who has given up his guns for good, and a blind man (Fernando Rey) who once sheltered the outlaw. Meanwhile, The Colonel (Landau, having switched allegiances) arrives in town with more Republican troops, who are also looking for the notorious bandit.

Spectral dread hangs over A Town Called Hell, a spooky and morbid atmosphere reminiscent of High Plains Drifter and Django Kill ... If You Live, Shoot!. Rampant death and torture abound, and it's no wonder where the town got it's name from. The landscape is more like a graveyard than a habitable community, and everyone seems to be waiting around either to kill or die. Adding to the gothic mood is Stevens' wraith-like appearance. Cloaked all in black, she is like the reaper from Ingmar Bergman's The Seventh Seal: she has come to collect a body, and she will not leave until the dead man is in her possession.

In contrast to all the gunfire, much of the dialog is delivered in barely audible whispers, so the soundtrack alternates between deafening violence and eerily silence. And unlike the guitar-driven scores popularized by Ennio Morricone, composer Waldo de los Rios (who scored Euro cult horror classics The House That Screamed and Who Can Kill a Child?) has written a more eerie soundtrack with a sustained sense of unease and horror.

While the names in the cast are renowned, its director is someone who deserves to be better known. Robert Parrish is an important, if overlooked, figure in film history. As a child actor, he had bit parts in Murnau's Sunrise, Allan Dwan's The Iron Mask, Raoul Walsh's The Big Trail, Lewis Milestone's All Quiet on the Western Front, Frank Capra's Forbidden, and several John Ford films. His association with Ford developed into Parrish becoming an apprentice editor on some of Ford's most acclaimed films, including Stagecoach, Young Mr. Lincoln, The Grapes of Wrath, and The Long Voyage Home. Parrish who also served along Ford in WWII in the Navy's Field Photographic Branch, editing The Battle of Midway and December 7th. He also won an Oscar for cutting Body and Soul, and went on to direct the noir Cry Danger with Dick Powell, Fire Down Below and The Wonderful Country with Robert Mitchum, Saddle the Wind with Robert Taylor and John Cassavetes, and The Purple Plain with Gregory Peck, among many others.

A Town Called Hell is a weird western, that's for sure, but it's a one-of-a-kind movie with a great cast. I'll be re-watching this one.