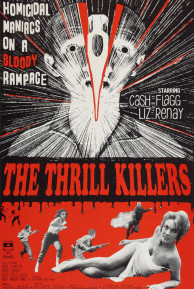 The credo of exploitation cinema is to have the most shamelessly provocative, alluring, and tantalizing title possible, even if the film doesn't live up to it.

Thankfully, The Thrill Killers more than lives up to its name.

Joe Saxon is a down-on-his-luck, out-of-work actor, and his wife Liz is sick of it. She leaves him and goes to visit friends at a nearby diner, and Joe goes looking for her. Little do they know that they are both walking into not one, but two unfortunate situations. Not only have three lunatic murderers escaped from a mental institution and taken over the diner, but a fourth, unrelated psycho is hitchhiking around around the outskirts of Hollywood and killing everyone in his path.

This movie has it all. Decapitation. Axe attacks. Hollywood pool party debauchery. Groovy dancing. Diner invasion kidnappings. A horse and motorcycle chase. A trip down the Hollywood Walk of Fame (including Buster Crabbe's star). People are thrown off mountains. There are fist fights. Gun fights. Spousal fights. Cowboy campers.

I loved this movie. It has a hard pulp edge and an unhinged aesthetic sensibility. It's a spit in the face to slick, mainstream, and morally grounded movies. The whole plot unfurls like some nightmare: one minute you're at home with your lame ass husband, the next you're meeting a friend for a burger at the diner, and the next three ax-wielding maniacs have you hostage, and then just when you think you're home free there's that other maniac roaming around. The story is over-the-top, but it is supposed to be, and this film manages to balance being both exciting and frightening at the same time.

The movie was directed by Ray Dennis Steckler (who also stars as the hitchhiker under his pseudonym, Cash Flagg). In an interview on the DVD, Steckler explained, "I just wanted to make a crazy movie … and then I got carried away at the end with the horse chase … I'm playing Federico Fellini, now, I can do what I want!"

As if the movie didn't have enough psycho cred already, apparently the horse chase stunt double lived on a nearby ranch with the Manson family.

I think I need to see more of Mr. Steckler's movies.

Available on DVD.
Posted by Cullen Gallagher at 12:04 PM