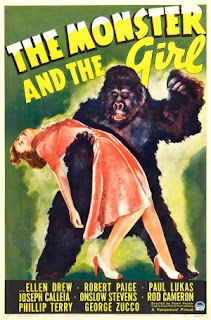 After a gangster sullies his sister's reputation, Scot Webster goes gunning for revenge and winds up framed for another murder before he can kill the guy he wants! After his execution, scientists remove his brain and put it in the head of a gorilla. Once the experiment is complete, the gorilla escapes and goes hunting for revenge.

In case you were wondering, this movie rules.

The Monster and the Girl is just over an hour's worth of classic Hollywood guy-in-a-gorilla-suit goodness. It's also directed by Stuart Heisler, who in just a few years would direct the great Veronica Lake-Alan Ladd adaptation of Dashiell Hammett's The Glass Key. You can tell this isn't some hack job by just how seriously Heisler treats the material. Strong, compelling performances from the actors, and richly stylized camera compositions and direction. The last third of the movie, when the gorilla goes on his murder spree, is stunning to watch unfold. Much of it occurs without any dialog, just silent stalking and vicious, sudden attacking. Remarkably photographed and dynamically edited, it evokes the same shadowy anxiety and dread as some of the great film noir endings--only with a gorilla thrown into the mix.

"The Monster" is played by Charles Gemora, one of the legendary Hollywood gorilla guys. Gemora also had a long career behind the scenes, working on sets for silent classics like The Hunchback of Notre Dame, The Thief of Bagdad, The Phantom of the Opera, and The Black Pirate, and later he spent decades working as a makeup artist. "The Girl" is Ellen Drew, a terrific actress who also appeared alongside Dick Powell in Preston Sturges' wonderful comedy, Christmas in July, as well opposite Vincent Price in Samuel Fuller's western, The Baron of Arizona, and with John Payne in Robert Florey's great B-noir, The Crooked Way. Also in the cast are Phillip Terry as the brother, and Paul Lukas (Academy Award-winner for Watch on the Rhine) as the wicked gangster.

And the scientist who makes all the magic happen? None other than the great George Zucco!

I've seen it a couple times, and will be watching it many times more. I'm glad I have this one on DVD for future reference.
Posted by Cullen Gallagher at 10:16 AM