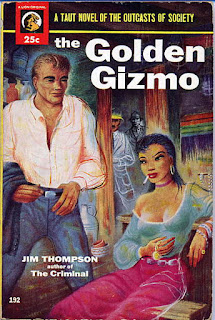 I absolutely loved The Golden Gizmo. It might be the most batshit crazy Jim Thompson book I've read (16, so far) and for Thompson, that's saying something. The Killer Inside Me may be nutso, but does it have a talking dog? No. But The Golden Gizmo does. The dog also sings. And it kills. And that's just for starters. It reads like slapstick anarchy: full of pratfalls, perversion, and psychosis, like some long-lost Marx Brothers noir made by Roger Corman.

The main character is Toddy Kent, a door-to-door gold buyer. When he accidentally pockets a 24-karat gold watch from Mr. Alvarado, his life turns upside down. His room is tossed, the watch stolen, and his dipso wife, Elaine, strangled with her stocking. Toddy thinks Alvarado is guilty of the theft and murder, and Alvarado thinks it was Toddy. But before Toddy can figure out what really happened, however, he finds himself working an illegal gold running scan across the Mexican border for Alvarado, and everywhere he turns there seems to be someone waiting to sap him over the head or chase him into an alley.

Originally published by Lion in 1954, this is certainly Thompson's most bonkers plot yet, and it reads like one giant slapstick chase scene after another. In one gloriously zany escapade, Alvarado's partner, Dolores, and the talking dog chase Toddy into a cabaret, where he joins the performance on stage, then a chorus girl swings at him with a wine bottle, he escapes into an alley, and then into a brothel where he must engage the services of a girl, but before he can use them he is on the run again, through a hidden door in a wall, he interrupts another man's liaison and beats the guy up, climbs up a fire escape while hands emerge from windows grabbing at his ankles, on the roof he knocks over a chimney, falls through a skylight into a flophouse where he is shuttled into a church service where, wouldn't you know it, the dog is waiting for him, singing with the choir. The dog's singing, however, is so bad it gets the both of them kicked out onto the street where is he picked up and taken to Alvarado.

Yeah. And you thought I was kidding about how weird this book is …

But just when you thought Thompson has gone off the deep end, he throws in a paragraph like this, a perfectly crafted story in just a few lines so packed with a lifetime of hurt and despair. Slightly pathetic, but at the same time sympathetic.

Toddy hadn't cried since the night he ran away from home. He'd half-killed his stepfather with a two-by-four, bashed him over the head as he came into the barn. He'd tried to make it look like an accident, like one of the rafters had broken. But he was shaking with fear, with that and the bitter coldness of the night. He'd huddled down in a corner of the boxcar, and sometime during the night a tramp had crawled into the car also. Observing the proprieties of the road, the tramp had gone into a corner, that corner, to relieve himself. And Toddy had been soaked, along with his thin parcel of sandwiches. The stuff had frozen on him. He'd cried then, for the last time.


And, in a nutshell, that's Thompson for you. A bit of a maniac, yet somehow strangely human.

Available in print/ebook from Mulholland Books.
at July 31, 2015