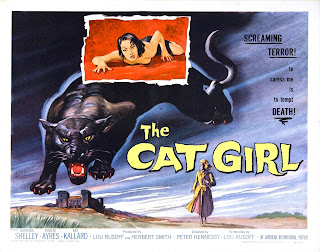 The Cat Girl (1957) is the lesser-known but still notorious remake of Jacques Tourneur's 1942 classic, Cat People. I say "lesser-known" because it has never been on DVD (though you an stream it here at AMC), and "notorious" because those who have hunted down a copy seem to all have a negative opinion of it. I beg to differ.

I liked The Cat Girl. Sure, it's no Cat People (what is?), but there is still much to enjoy about the remake.

Barbara Shelley, star of Village of the Damned and Hammer classics like The Gorgon, Dracula: Prince of Darkness, and Rasputin: The Mad Monk, plays Lenora, a young woman summoned to her family's creepy estate to learn about her inheritance. Unfortunately, she's not getting any money, just a family curse that turns her into a cat with the urge to kill. Surrounded by a cheating husband and an old-flame who married someone else, Lenora has a lot of rage she's looking to unleash. 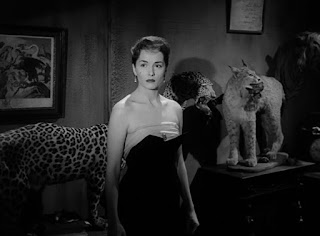 Like its predecessor, The Cat Girl leaves much to the imagination and relies on the shadow of implied violence. And despite its low budget, the film works well within its limitations of small, interior sets.

Another thing I like about The Cat Girl is that it combines two of my favorite psychological thriller concepts. First is the, "Look, you're crazy, even though you don't yet realize it" scenario when the family is trying to convince her the curse is real. Second is the, "Look, I'm crazy, even though you don't believe me" scenario after Lenora is convinced of her duplicity and she can't convince the law or the doctors that she is guilty of murder. There's something utterly terrifying about having your friends and family tell you you're crazy or illogical, when everything appears normal to you. It makes you feel so vulnerable and alone. And then, to make matters worse, once she accepts the truth about the curse, she can't convince anyone else about it. The rest of the world thinks she's even crazier than ever. The effect of such psychological alienation is a fascinating cinematic subject, and I'm drawn to plots that explore that area. 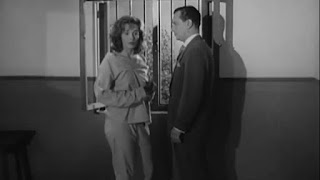 Barbara Shelley gives a marvelous performance as someone whose mental state is constantly shifting, from skepticism and disbelief to shock, denial, guilt, remorse, and ultimately vengeance, all the while unsecured by a sense of sadness and rage that she was never able to express or even admit to herself. The public and private perception of her psychosis is something The Cat Girl goes into more depth than the original. When Lenora is locked in a cell for observation by doctors, the film follows in the tradition of Jane Eyre, The Yellow Wallpaper, and other narratives about misunderstood "madwomen" locked away behind closed doors. Seeing her as neither a simplistic villain or victim, The Cat Girl sympathizes with Lenora's vulnerability against a system and society that represses both her mental and physical desires and changes.

I also like the whole "creepy family mansion" and "family curse" pretexts. What happened to those? Did families downsize to smaller, suburban homes or city condos? And did curses go away with the internet? It seems like butlers (or uncles, as is the case in The Cat Girl) must be depressed, without un-notarized wills to read to younger family members who they haven't seen since they were children.

With its creepy gothic atmosphere, feline violence, unsupportive family and friends, and a mentally unstable protagonist, I gotta admit, The Cat Girl is a pretty good remake that brings new things to the table.
at July 29, 2015