"So Nude, So Dead" by Ed McBain (Hard Case Crime) 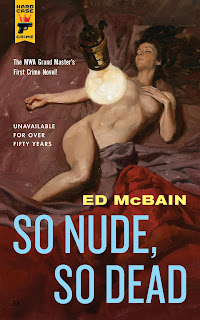 Under normal circumstances, waking up in a hotel room next to a beautiful blonde would be a good thing.

But not for Ray Stone.

This time, the blonde is dead, and 16 oz. of heroin are missing.

So, he calls his dad for help, only his dad calls the cops.

Now, the cops want him for murder, the dealers want their drugs, and all Ray Stone wants is a fix. And he needs it bad.

Criss-crossing Manhattan, Stone can run and hide from his pursuers, but the one thing he can't hide from is his addiction. At some point he is going to have to come out and look for more stuff. And if he doesn't find the missing drugs, the dealers will eventually kill him. And if he doesn't find the real killer, the cops will eventually arrests him.

It's a start to a bad day for Ray Stone--but it's also the start to a great career. The second book and first crime novel by the writer most famously known as Ed McBain, it was originally published in 1952 as The Evil Sleep! (as Evan Hunter) and again in 1956 as So Nude, So Dead (as Richard Marsten). And now it is back in print after half a century by Hard Case Crime.

Some writers take a few novels to perfect their craft or develop their own voice. McBain was not one of those writers. He was one of those rare, absurdly and enviably talented few who had "it" from the get-go. Merging a wrong-man-on-the-run mystery with the then-burgeoning junkie-sploitation trend, McBain created a dynamite noir thriller with a fast-burning fuse. Set against an authentically grimy New York City backdrop, McBain takes his character from sleazy dives to swank apartments, jazz clubs to bathhouses, Gun Hill Road up in the Bronx to a rural Connecticut farmhouse. One can't ask for a better NYC tour guide than Ed McBain.

There is much to admire in this book, and I could ramble on singing its praises, so I'll end with this:

So Nude, So Dead is just so damn awesome.

To whet your appetite, here's the opening two paragraphs:

"There was the jangling, of course. It wouldn't be morning without the jangling. It was as if someone deliberately gathered up every nerve end in his body and tied them together every night. And in the morning--this morning, every morning--he'd sit up in bed with the ache in his body. It was almost delicious, especially when he knew he had the stuff waiting for him. It was painful too, but painful in a sweet way, almost as if the wanting were too exquisite to bear.
God, he needed a shot."