"Night of the Horns" and "Cry Wolfram" by Douglas Sanderson 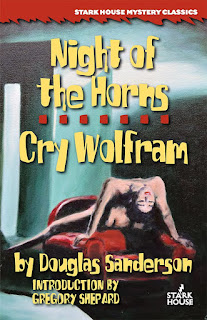 If it weren't for Stark House Press, I might never have read Douglas Sanderson. Or it might have taken me longer than it did, which is too long already, and I'm hitting myself for not reading him as soon as they released their first collection of Pure Sweet Hell and Catch a Fallen Starlet in 2004. But I didn't. I also missed their 2006 collection, The Deadly Dames and A Dum-Dum for the President. Looks like I'm the real "Dum-Dum" here for being so late to the game, because I just read their latest collection, Night of the Horns and Cry Wolfram, and they're both high caliber 1950s suspense novels, a punchy blend of adventure, humor, and fist-fighting, gat-spewing action.

Night of the Horns (1958) is about a lawyer, Robert Race, trying to make an honest buck, but whose two current clients are a man on trial for statutory rape, and a racketeer named Kresnik. Against his better judgement, Race agrees to pick up a suitcase at the docks for Kresnik. Bad decision. Race is attacked and the suitcase stolen. Soon, he finds himself on the run in Mexico, chasing after the suitcase, his attacker, and his run-away wife, all the while trying to avoid the cops, the gangsters, and the Mexican locals he's pissed off in his pursuit.

With a darkly humorous edge to his style, Sanderson seems a literary cousin to Jonathan Latimer. Both authors mix wise-cracks with head-cracks, poking fun at the genre while pounding the crap out of the characters. Light hearted at moments, but still plenty dark.

Cry Wolfram (1959) is another international thriller, this time in Europe. Imagine John Dickson Carr writing The Sun Also Rises--a dizzyingly twisty jet-set whodunit that moves from French high society nightlife to the Spanish sun as bodyguard John Molson tries to solve his employer's murder and unravel a corporate conspiracy. It would be a fine vacation if not for all the double-crosses, back stabbing (figuratively and literally), dead bodies, and rampant corruption going on. Overall, an exotic and exciting suspense story.

Favorite quotes:
"After two years of marriage the kick not only remained, it increased. Each time i made love to her was more potent than the last. Merely to watch her undress was like being belted by a mule." (Night of the Horns)

"I opened my eyes and the pale-faced guy was leaning over me with a hypodermic needle the size of an Indian lance. He hadn't yet washed his hair. He was flaked thick with dandruff and I thought some of it would fall on me. The prospect wasn't pleasant." (Night of the Horns)

"The gun bored hard at my vertebrae. I felt a sense of hurt pride that she had never really liked me." (Cry Wolfram)
at July 05, 2015