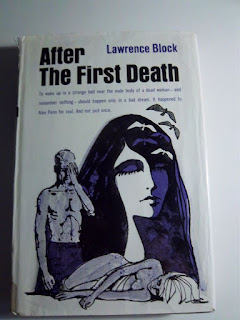 Upon waking in a strange hotel room with a hellish hangover and a dead prostitute not the floor, with the door bolted from the inside, Alex Penn had a discomforting realization:

The second time he's woken up from a bender with next to a beautiful corpse, Alex doesn't think the law will be very lenient with him this time around, he goes on the run, hiding out in sleazy midtown hotels, determined to figure out who has framed him--twice--for murder. That is, unless he is really is guilty of murder.

Block is one of my favorite New York City writers, with impeccable  depictions of Manhattan's scummy streets and scummier inhabitants, and After the First Death is one of my favorite books of his. Originally published in 1969, its firsthand intimacy of the island's geography and cultural climate is invaluable. Block gives us a vivid impression of the bygone days of the dirty Forty Deuce, of Times Square hustlers and their desperate bustle, of Village nights spent ripping off sailors and setting them up with a couple of imaginary girls that won't give them a happy ending, of fleabag motels and dirty sheets, and endless wanderings and nights that go on forever.

Block's early work is edgy, his characters dangerous, and their intentions disreputable. They're not likable people, their vices aren't charming, and their violent habits aren't heroic. In the case of Alex Penn, he's a scumbag. A history teacher who cheated on his spouse, ruined his career, alienated friends and colleagues, and contributed to the death of two women (whether by his hand or whoever framed him). What's interesting about the plot of After the First Death is that Alex is pursuing a truth that could very well confirm his guilt instead of absolve him. Even at best, recreating the alcoholic nights lost to his memory is only going to show just how reckless and despicable he is.

So many mystery novels use booze as a crutch, but Block's books show the destructive effects of alcohol on the self and on others. He doesn't make alcoholism and debauchery attractive. The opening chapter is one of the most vivid and nauseating renderings of a hangover. There's nothing cool or romantic about it. Alex Penn is miserable, and he has only himself to blame. And that emerges as one of the biggest themes of the book--regardless of whether or not someone is framing him, Alex has already screwed himself and others over in the past, and here he is repeating the past, "again" as he so bluntly puts it.

Told in the first-person, much of After the First Death is stuck in Alex's head as he tries and fails to make sense of what happened. Perhaps the biggest stumbling block is that he is well aware that things might be as they seem--he might have killed the woman. Even if he didn't, he knows he was capable of it, which is almost just as bad. He is in a perpetual state of guilt--every drink he takes is a crime waiting to be committed, and therefore every desire to drink represents potential violence. It's a steadily downward trajectory that reminds of David Goodis, an introspective narrative of relentless self-doubt and self-loathing.

Lest I make this book sound like a total downer, Block's characteristic wry humor is peppered throughout the book. Above all else, Block is an incredibly story-teller with an addictive, inimitable voice that brings you back time and again to his work. The timing, the structure, the scenes, the rhythm of the dialog, everything you love about Block is here.

Visit Lawrence Block's website for links to purchase the book.
at July 28, 2015