"The Changeling" (1980), or: How I Learned To Stop Worrying and Love the Big, Old, Scary House 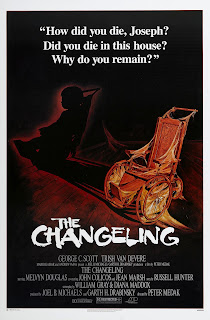 Big old houses scare the crap out of me. Not dudes with chainsaws, machetes, axes, knives, or striped sweaters. Slashers, shockers, goblins, ghouls--I love 'em all, but they rarely scare me.

But a big old house?

So, a couple of nights ago, alone in my apartment, I decided to put on The Changeling (1980), which had been recommended to me by a few different people. I knew it had George C. Scott, and that was about it.

No one told me about the house.

Of course, I was freaked the hell out. I even texted a friend during the movie. They reminded me that the 3-story house I grew up in Maine was a "Changeling" house. Not the most comforting words. Oh, well.

Despite my discomfort, I thought it was a great movie. Scott plays a composer whose wife and child were run over. Bereft, he relocates from New York City to Seattle and takes up residence in a huge house all by himself. Soon, he starts hearing noises. A strange banging the same time every morning. And then he uncovers a boarded up doorway in a closet behind some shelves. And then a spiritualist comes over, and Scott discovers there's more than a mortgage hanging over this property.

Much of the movie's effectiveness comes from its reliance on atmosphere. Not special effects, eerie music, or volume "jumps" that switch from soft to loud in a heartbeat. Instead, the camera sits in anxious isolation with George C. Scott as he endures the strangeness that he can feel but not see. The script features minimal dialog, and it is a very visually-driven film. But even with little dialog, Scott gives a magnificent performance, relying on his expressive facial features to communicate so much of his character.

The scenes that affected me the most were the ones that were the most mundane. Sitting in bed, hearing weird sounds in the house, wondering what the hell was causing them; exploring attics and basements; or finding inexplicable deviations in the architecture (such as when Scott discovers a hidden doorway behind some shelves). With an over-active imagination such as mine, the horrific possibilities hidden in each room seem endless. Thankfully, I now live in a studio, but even that is a bit too big for comfort, sometimes.

So, why did I sit through to the end of The Changeling? Well, I like horror movies, but most of all I like movies with a strong sense of atmosphere, one with patient camerawork slowly builds anticipation in the audience, a director that earns chills instead of opting for cheap effects, a cast of characters who carry conviction and emotional weight, and a story that is not just believable but that I want to believe in. The Changeling was all of these things.

I'll be watching this one again.