Confessions of a Record Fiend, Pt. 2

A few days after my last record binge, I was hanging out with a friend and watching a movie. I wasn't planning on going record shopping at all. But one thing lead to another, and there was a record he realized he forgot to buy and, well, I gave him my sympathy and support and suggested we run back to the store before it closed. What are friends for, if not record shopping? Naturally, I dove into the bargain bins and found some great stuff. 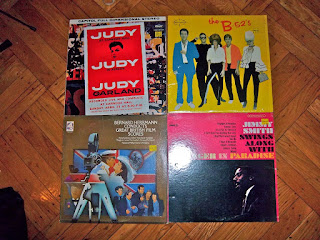 The biggest score, of course, was Judy Garland at Carnegie Hall. The first B-52's album was also a great find. Also picked up Bernard Herrmann Conducts Great British Film Scores and Jimmy Smith Swings Along With Stranger in Paradise. I got to see Jimmy Smith play live once, at The Iridium here in NYC, an amazing performance. He's one of my favorites, so anytime I see his stuff I grab it. 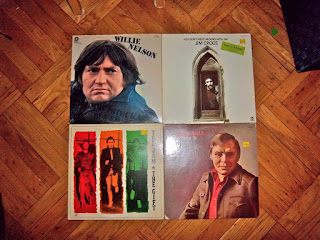 A compilation of early Willie Nelson tracks called Columbus Stockade Blues, Jim Croce's You Don't Mess Around With Jim, The Jam's The Gift, and Tom T. Hall's Country Is. 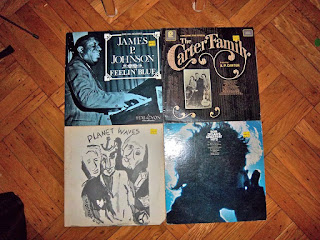 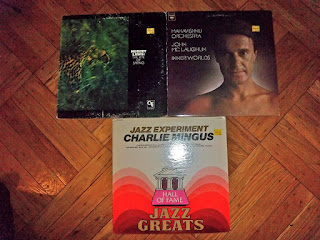 Was surprised to find these jazz records for so cheap. Hubert Laws' CTI recording of The Rite of Spring, Mahavishnu Orchestra's Innerworlds, and a live Mingus recording called Jazz Experiment, recorded in New York, December 1954.

The next day was a 25-cent sidewalk record sale. That might take two or three posts to explore. And I was back at Academy on Friday, so there will be many more confessions to come. And I might hit up Permanent Records this afternoon.

Email ThisBlogThis!Share to TwitterShare to FacebookShare to Pinterest
Labels: Confessions of a Record Fiend