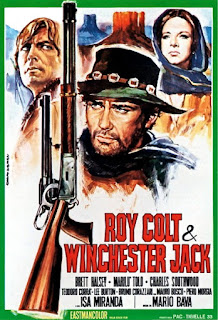 Italian director Mario Bava is best known for his horror films, such as the lushly gothic Black Sunday, the triptych Black Sabbath, the high-fashion murders of Blood and Black Lace, and the proto-slasher Bay of Blood. But Bava was more than just horror, he also did the Hitchcockian thriller The Girl Who Knew Too Much, the brutal kidnapping-gone-wrong thriller Rabid Dogs, and several sword-and-sandal movies. He also directed three westerns: Gunman Called Nebraska (aka Ringo From Nebraska, an uncredited co-directing credit), The Road to Fort Alamo, and Roy Colt and Winchester Jack (1970).

At first glance, this doesn't look like your average Bava movie--none of the rich, shadowy atmosphere of his black-and-white pictures, and none of the macabre elements of his other horror pictures--but it still exhibits the director's marvelous eye for color, his quirky and offbeat camera direction, and innovative approach to genre. Not your typical Leone- or Corbucci-inspired spaghetti western, Roy Colt and Winchester Jack is high-pulp mayhem of the finest order.

Former partners-in-crime, pen pals Roy Colt and Winchester Jack write each other (despite Jack's illiteracy) about their respective hardships. Going straight ain't easy for Roy, and crime hasn't been paying off for Jack. All of that changes when Jack comes into possession of a treasure map and heads off for gold. Recently appointed sheriff, Roy takes off after Jack--but is he going to capture his old friend, join up with him, or double-cross him and take the gold for himself? Traveling with Roy is a preacher with a sadistic mean streak and a greedy heart, and alongside Jack is Manila, a Native American con artist/prostitute with capitalistic drive and a phallic wooden abacus for keeping track of how much money she is owed for her sexual favors.

With its buoyant camera movement, dazzling colors, brothel hijinks, brutal desert massacres with excessive body counts, and epileptic death twitches, Roy Colt and Winchester Jack is what you might call a lunatic western. It is perverse, violent, and cartoonish, yet it is not a farce because it isn't making fun of the genre. Instead, it takes the hallmarks of the western and puts a psychotic, dirty-minded spin on them.

Posted by Cullen Gallagher at 11:04 PM