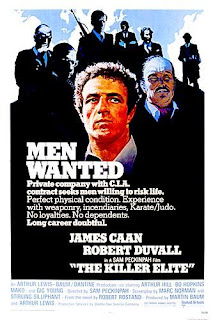 It was a killer decade for Sam Peckinpah. After cutting his teeth on television westerns like The Rifleman, his first feature film was 1961's The Deadly Companions (written by paperback writer extraordinaire A.S. Fleischman), an underrated movie whose anti-heroic narrative and elegiac mood shows the roots of Peckinpah's hallmark style. By the time he made his next feature, Ride the High Country, the following year, Peckinpah was already fully mature as an artist. Peckinpah continued with an extraordinary string of movies, each one masterful in their own way: Major Dundee (1965), The Wild Bunch (1969), The Ballad of Cable Hogue (1970), Straw Dogs (1971), Junior Bonner (1972), Pat Garrett & Billy the Kid (1973), Bring Me the Head of Alfredo Garcia (1974). Peckinpah's films are an uncanny alchemy of savagery, violence, and philosophy. He's capable of extremely brutality, and yet there are frequently moments of strange serenity in his films. He finds grace in the most unexpected of moments, whether in the rodeo ring, during a gunfight, or an unexpected moment of calm.

And then came The Killer Elite (1975). Maybe it was the hype of his earlier work that distracted the critics, or maybe they were just too dense to get it, but they hated it. Variety called it "an okay Sam Peckinpah actioner" and "boringly complex."  The New York Times said, "Sam Peckinpah knows how to make movies but perhaps he has forgotten why. At least that is the feeling given by this bag of mixed, often damp fireworks." And Roger Ebert wrote, "directed and acted with a certain nice style, but it puts us through so many convolutions of the plot that finally we just don't care." 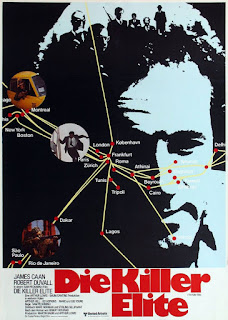 Since I wasn't around at the time, I can't say what it was like to see it back in 1975. But seeing it now, it's pure Peckinpah. The style, the story, the cynicism, it all fits in perfectly within Peckinpah's body of work. The story is a twist on the Robert Ryan-William Holden betrayal in The Wild Bunch, in which former partners find themselves on opposite sides of the law. In The Killer Elite, secret agent James Caan is double-crossed by partner Robert Duvall, who kills the target they are supposed to protect, and shoots Caan in the elbow and kneecap. After a long recovery, Caan is back on the job with two new partners, Bo Hopkins (lead greaser from American Graffiti) and Burt Young (Paulie from the Rocky movies), and they must protect another target from not only Duvall, but a team of ninja assassins.

The plot is a strange mixture of 70's cinematic trends (political paranoia, martial arts action, and urban thriller) with Peckinpah's characteristic concerns about the culture of violence, the bonds of masculine friendships,  and anachronistic characters who have outlived their time. Caan and his crew, like The Wild Bunch, never have a chance of winning. Even if they succeed in their mission, they can never succeed against the larger forces. It is a new era, governments and corporations are pulling the strings, and the old generation is being phased out (or killed off) one by one. Time is not on their side.

Like the children toying with the scorpion as it is devoured by ants during the opening of The Wild Bunch, Peckinpah presents a social order in the throws of chaos. Off-balance with a perverse sense of justice, it isn't clear who the hero or villain is, what is right or wrong, where one should go or if one should stay put. In The Killer Elite, snipers could be on any roof, ninjas around any corner, bombs under any car. Your partner could be your enemy, your boss your enemy's boss. And your mission, your purpose for living, might not mean a damn thing.

The film also offers something different from Peckinpah's earlier films: whereas the previous decade was almost exclusively Western settings (except for the English countryside in Straw Dogs), The Killer Elite exchanges the desert for the big city. Peckinpah's first urban film, it was shot on-location in San Francisco. Throughout the movie you can see his distinctive fragmentary cutting and slow-motion editing. 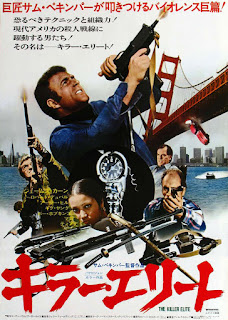 Great directors can use landscapes to different effects. John Ford's express a sense of majesty, a natural order that is bigger than people. Whether in the city or in the country, Anthony Mann's shots are ominous and forbidding: there's always something dark hidden in the shadows, just as there is something dark hidden within his characters' souls. To me, Peckinpah's landscapes often express ambivalence. Every desert, every mountain, every street, and every building is a theater of war. From Chinatown to the piers, the streets to a ship's deck, The Killer Elite moves all over San Francisco, up and down its hills, and along the Embarcadero Freeway. Every place is a battlefield. And yet, his characters are drawn to these places. There's no place else for them to call home (not that they would want to go home, if there was one), for it is through the journey of violence that his characters are able to define themselves. Mayhem is the only meaning their lives have.