Sure, Netflix, YouTube, Archive.org, and a bazillion other sites offer us a seemingly unlimited supply of movies. But still, there are a lot of movies one can't see (or order) online, and that's because they're lost. Or just playing a really, really, infuriatingly good game of hide-and-seek. And while more than 90% of silent films are gone, it's not just the pre-talkies that are missing from our screens today, as a number of more recent films are also AWOL.

Here is a list of seven presumably lost movies that I'd love to see. I say "presumably" because, as sometimes happens, these movies are found in archives, closets, or antique stores. 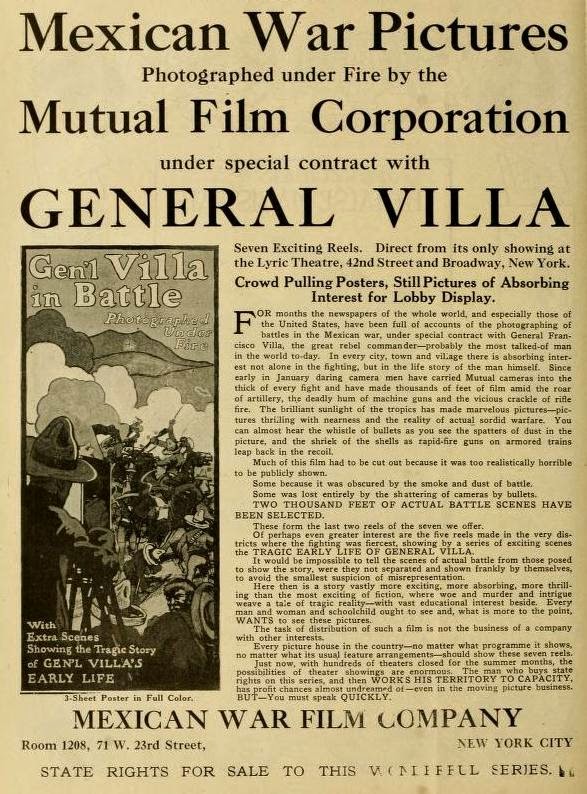 Shortly after arriving in Hollywood, 27-year-old Raoul Walsh (the future director of The Big Trail, High Sierra, White Heat, and umpteen other classics) was sent down to Mexico for his second film as a director. The assignment? Ride with Pancho Villa and his army, and film them on the front lines! To make this film a reality, Mutual Film Corporation had to pay Pancho Villa and guarantee him a percentage of the profits.

Read more about the legend and reality behind The Life of General Villa here at the Smithsonian and Cine Silente Mexicano (in Spanish). 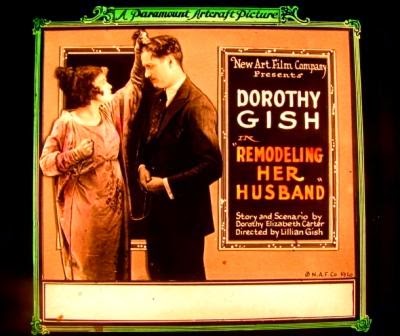 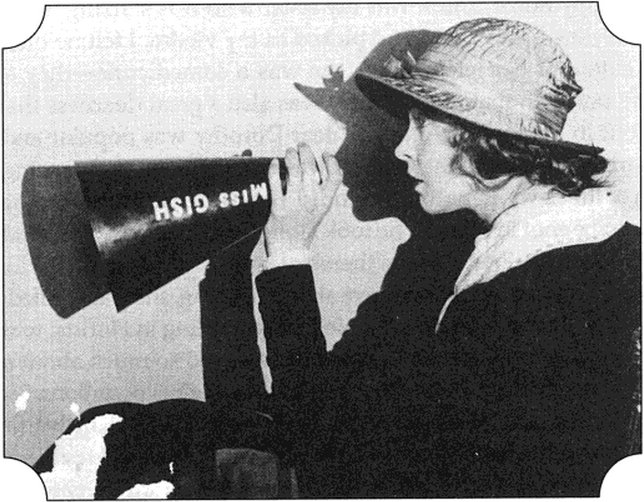 Remodeling Her Husband is the only film directed by legendary actress Lillian Gish. It was written by Dorothy Parker, and starred Lillian's sister, Dorothy Gish. The story is about a woman who is fed up with her husband's philandering ways, so she leaves him and reinvents herself as a prosperous Wall Street businesswoman. The legacy of women directors in Hollywood was kept hidden for decades, and over the past few years scholars have been resurrecting this incredible legacy. Many of the films, however, are lost, save for a few reviews, posters, and anecdotes found in trade publications, memoirs, and biographies. 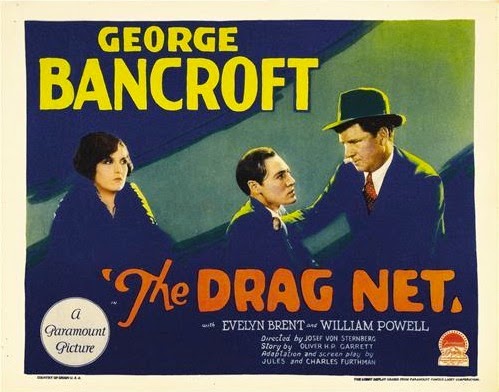 In the late 1920s, Josef von Sternberg directed three seminal crime films that survive: Underworld (1927)  The Docks of New York (1928), and Thunderbolt (1929). The Drag Net, also made in 1928, is considered lost. Judging by the quality of his work in this era (Sternberg is among the most visually stylish in the history of cinema), this is a huge loss. The fact that the intertitles were written by Citizen Kane co-writer Herman J. Mankiewicz makes this even more desirable!

Check out how cool this one sounds. What an amazing cast (and such colorful character names).

“When he becomes convinced that he has accidentally killed his partner, Nolan goes on a bender. Actually, the crime was committed by one of gangster William Powell's henchman. Powell's moll Evelyn Brent takes a liking to Nolan; she tells him the truth, whereupon Nolan pulls himself together and goes after Powell all by himself.” (Description by Hal Erickson, Rovi) 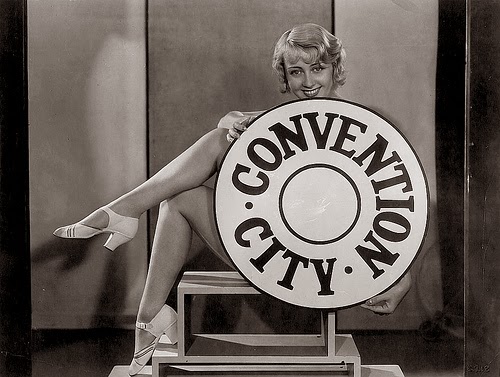 Check out this tagline: "Traveling Salesmen on the Make! Farmers' Daughters on the Jump! Jealous Wives on the Trail! Missing Husbands on the Pan! That's Convention City"

"We must put brassieres on Joan Blondell and make her cover up her breasts because, otherwise, we are going to have these pictures stopped in a lot of places. I believe in showing their forms but, for Lord's sake, don't let those bulbs stick out."

Another potential gem lost to the dust of time. 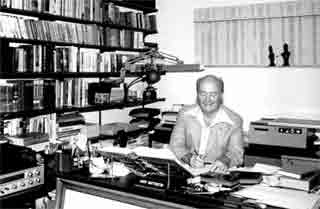 Here's a real lost curio for noir fans. Harry Whittington, King of the Paperbacks, himself financed and directed a movie called Face of the Phantom. Not much is known about the movie, what is was about, or what happened to it. As Whittington himself recollected, "I had contracted the movie virus in Hollywood. I returned to Florida, wrote, produced and directed – and could not sell to a distributor – a horror film called Face of the Phantom. For the next eight years I could not produce or sell enough scripts to stay ahead of howling creditors." 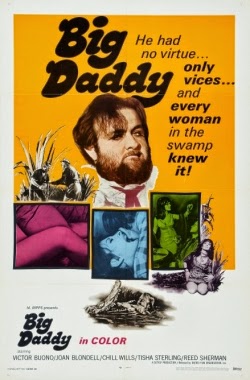 With a tagline like this, one can only imagine the sleazy exploitation goodness (or badness, depending on your viewpoint) that this might have been: "He had no virtue ... only vices ... and every woman in the swamp knew it!"

Big Daddy starred Victor Buono (The Strangler and The Mad Butcher) and Joan Blondell. It was directed and written by Carl K. Hittleman who had previously written Jesse James Meets Frankenstein’s Daughter and Billy the Kid vs. Dracula, and directed Kentucky Rifle, The Buckskin Lady, Gun Battle at Monterey, and Sheena: Queen of the Jungle. Considering those credits, this one might not be a masterpiece, but it probably would have been good, schlocky fun.

IMDB summary: "A visitor to the Everglades swamps in Florida encounters and falls in love with an uneducated girl. But he finds competition for her affections from the unlikely and mysterious A. Beauregard Lincoln. He also discovers danger from nature in the form of vicious alligators and from the mystical in the form of a voodoo witch doctor." 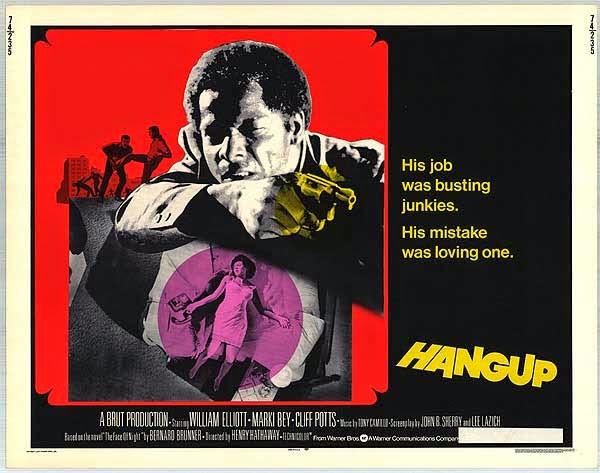 Henry Hathaway had one of the most extraordinary careers in Hollywood. Among the classics he directed are The Shepherd of the Hills, The House on 92nd Street, The Dark Corner, Kiss of Death, Call Northside 777, Fourteen Hours, Rawhide, Niagara, Garden of Evil, North to Alaska, The Sons of Katie Elder, Nevada Smith, and True Grit. This was his last film, a Blaxploitation action movie about an undercover cop going after drug dealers. You can read more about the movie here at Temple of Schlock. While the movie is still AWOL, the trailer managed to survive:

Next time you are cleaning your room, check to see if any of these films happen to be hiding under your bed or in your closet collecting dust.
at June 02, 2014

Email ThisBlogThis!Share to TwitterShare to FacebookShare to Pinterest
Labels: Lists!