"The Posthumous Man" by Jake Hinkson 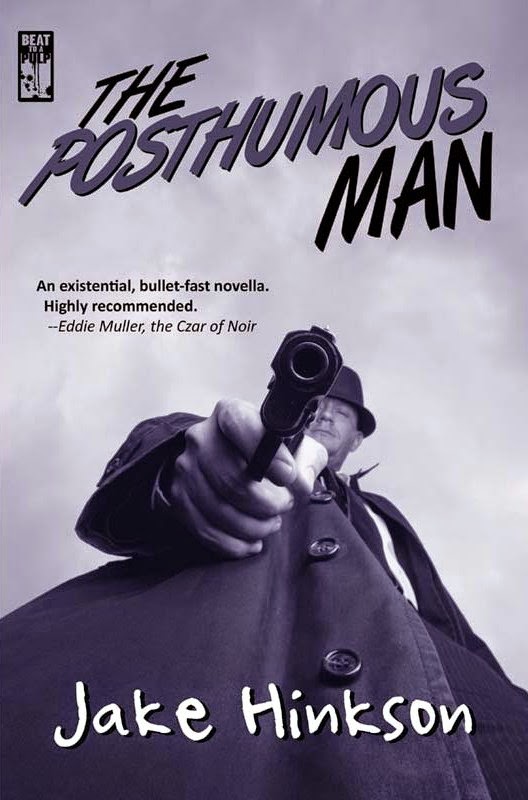 “From the darkness, something stabbed my face.” And that something is life.

So begins Jake Hinkson’s The Posthumous Man, in which a man who killed himself is brought back to life in the emergency room. Elliot Stilling is given the rarest of opportunities in the noir universe—a second chance, which he screws up almost as soon as he is brought back to life. First mistake: falling under the rapturous spell of his nurse, Felicia Vogan. Second mistake: escaping from the hospital. Third mistake: accepting a ride in Felicia’s car—a ride that leads Elliot into a circle of thieves aiming to rob a truck carrying two millions dollars worth of Oxycodone. And now that he knows about the plan, it’s too late to back out now.

As economical as it is electrifying, The Posthumous Man is a lean, mean, noir machine that evokes the stripped down Gold Medal paperback thrillers of the 1950s. In particular, Hinkson seems to be channeling the spirit of David Goodis and his brooding blend of melancholy and action, two qualities that would normally be at odds with one another, but in the world of noir they go hand in hand. But Hinkson is no copycat, and instead of Goodis’ gutter blues Hinkson sings of a spiritual crisis.

Elliot is a former preacher, and even though he claims to have given up on his old beliefs, the separation between old and new self isn’t so simple. “It had been almost two years since I had been brutally relieved of the impression that God was listening to me. But like a grown man crying for his mother, some part of me cried out for Jesus to help me.”

In Stan, the mastermind behind the drug heist, Elliot finds his counterpart, someone who is also trying to reconcile divine aspirations with human failure. But while Stan has embraced a life of crime—“Apostle Paul earned his glorious salvation by being the chief sinner. I figure to outdo him.”—Elliot hasn’t lost all faith. He may have resigned himself from ever finding redemption, but he does believe in the goodness of others, chiefly Felicia. For Elliot, the stakes of the robbery are higher than two mil: he’s putting his existential philosophy to the test, looking for some reason—and someone—to live for.

Hinkson’s meticulously sparse prose is tinged with moments of noir poetry, such when Stan tells Elliot, “you’re pouring yourself a long tall drink of misery,” or this Emily Dickinson-esque exchange when Stan and Elliot first meet:

“Elliot Stilling. That name sounds familiar. You somebody I heard of?”
“I’m nobody.”
“Nobody’s nobody.”
“Most people are nobody.”

A stunning novelist (Hell on Church Street) and astute critic (Noir City and Criminal Element), Jake Hinkson is a dangerous man—a dangerous man we can take great pleasure watching out for.

Email ThisBlogThis!Share to TwitterShare to FacebookShare to Pinterest
Labels: Beat to a Pulp, Jake Hinkson