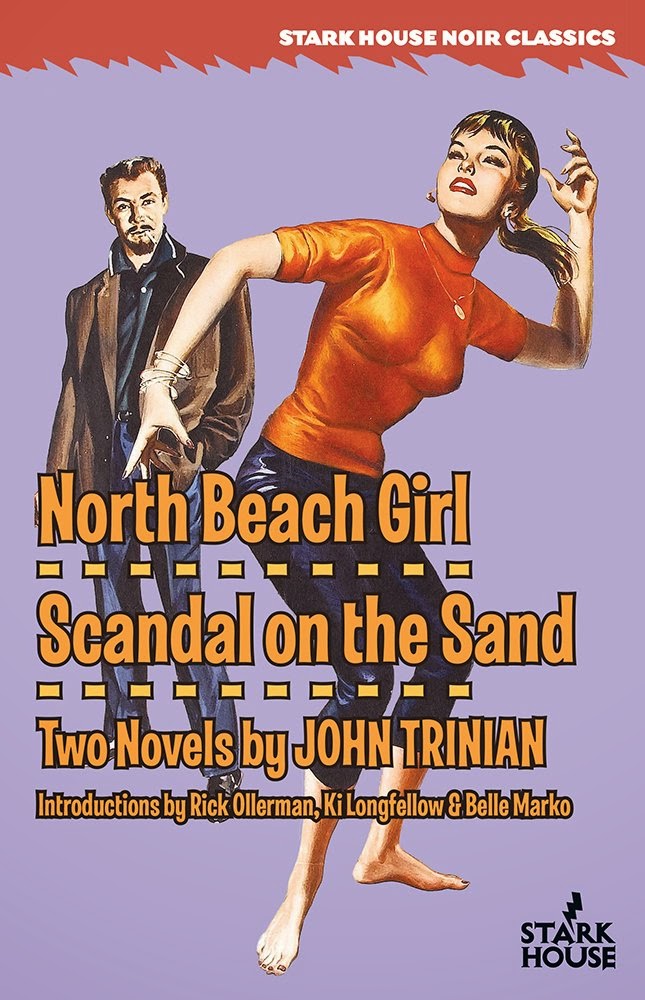 John Trinian is not your typical Gold Medal author, and North Beach Girl (1960) and Scandal on the Sand (1964) are not your typical Gold Medal paperback originals. Far from ordinary, these two titles are among the most unique and extraordinary Gold Medal originals I’ve had the pleasure to encounter. Once again, thanks must be given to the team at Stark House Books for rediscovering these should-be classics, and collecting them in new volume with three illuminating essays by historian Rick Ollerman, close friend Ki Longfellow, and daughter Belle Marko.

A radical blending of 1960s counterculture and noir sensibilities, Trinian’s novels evoke the West Coast spirit of the times with the doomy melancholy of Goodis. The plots vaguely touch on murder, but they're more like hangout books, with the characters drunk or stoned most of the time. Booze, drugs, and art flow freely through these pages—at times the inebriation is a pure high, at others it’s a hazy attempt to block out reality. But unlike something like Lawrence Block’s A Diet of Treacle, these books aren’t Beatnik-sploitation, or caricatures of the scene. Trinian, who was pals with Richard Brautigan, Allen Ginsberg, and Jack Kerouac, lived the lives he writes about. With each passing page, there’s an authenticity to North Beach Girl and Scandal on the Sand that can’t be faked—it gives the books their realism, but it also gives them their sadness. Trinian feels for his characters, their troubled pasts, their hazy futures, and their lost present.

Though at first glance, the title North Beach Girl might sound like some Frankie and Annette sandstorm, it is nothing of the sort. Erin, the main character, just quit her job as an artists’ model. She crashes as a garage paid for by another woman named Bruno, who runs a local art gallery. The gallery has attracted a local crew of beatniks, drunks, artists, wannabes and has-beens, including Riley, a painter who comes knocking on Erin’s door late one night, piss drunk, wanting to hire her as a model. Bruno, who obviously has some sort of affection for Erin, is resentful and jealous. Deep in debt and looking for a way out, Bruno wants Erin to borrow money from her dying grandmother in order to invest in a larger gallery space. And Erin, indecisive in life and love alike, hasn’t made up her mind what to do about anything.

“The bitter confusion of her life became magnified and it seemed to melt into a solid lump of nothingness. Why should she think about it? Life was wretched and disgusting. It was mean for the stupid idiots who could swallow its lies and shadowy promises. Only fools lived in peace. She thought of the cemetery where her mother was buried. Give and take, old ashes to even older ashes … have another drink and the hell with it. One negated the other.”

It’s as gloomy as any of Goodis’ gutter monologues, a pure mainline dose of 100% noir. 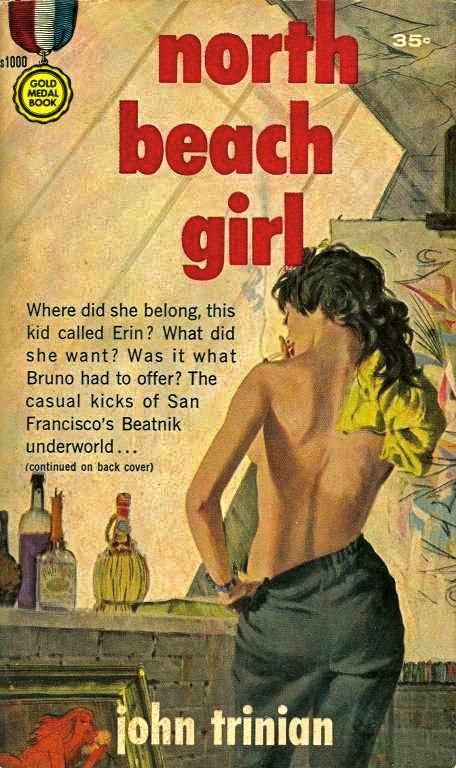 Trinian’s first line in North Beach Girl establishes the theme of entrapment that runs throughout the novel: “Erin covered herself with the pale green robe and sat on the empty packing crate by the narrow barred window.” From her workplace to the garage to the gallery to her grandmother’s house—and of course the variety of places where she goes to drink—Erin never has a place of her own. Always in between, borrowing, crashing, or killing time, she lives in a permanent state of impermanence. While she may be an anti-establishment figure of the time who has dropped out from mainstream society, Erin isn’t a romantic or idealistic character at all. She’s realistic as hell. Most of us have either known an Erin, or been like her (at least for a little bit). And that’s where the power of North Beach Girl is—in the characters. Unlike Riley who likes his “entertainment real simple,” where “the good guy wears a big white hat and the bad guy wears a black one,” Trinian writes ambiguous characters who are neither good nor bad, neither heroes or villains, nor even anti-heroes. They’re screwy people who drink too much and say stupid things and waste time and never seem to figure out what they’re supposed to do. And that’s why Trinian’s characters are among the most recognizably human—and modern—in all of the Gold Medal paperbacks.

Though sex, drugs and murder are very much a part of the story North Beach Girl, the novel isn’t plotted like your standard head-first-into-the-action thriller. Trinian takes his time, slowly developing the characters, their relationships, and their inebriated trajectories. North Beach Girl is structured like an extended bender, coming out of the haze for brief moments of recognition and sobriety, only to drive back into the fog once they see the bleakness of their circumstances.

One aspect of Trinian’s writing that does remind me of Lawrence Block, and also anticipates the work of Ed Gorman, is the portrayal of alcohol and drugs. These aren’t people who drink to have fun, or get high to have a good time—they’re just sad wrecks of people. Trinian has great sympathy for them and their constant need substances—and he never pities them, perhaps because he was something like them, himself. As his daughter, Belle Marko, writes, “He was popular and unreliable, his own worst enemy in many ways, getting in his own way with self-sabotage and isolation, depression and bouts of rage and horrible remorse. He was plagued with demons …” One of the biggest clichés of noir literature is its senseless and unrealistic celebration of alcoholism. Trinian, on the other hand, hammers home the unpleasantness of what it really is like. 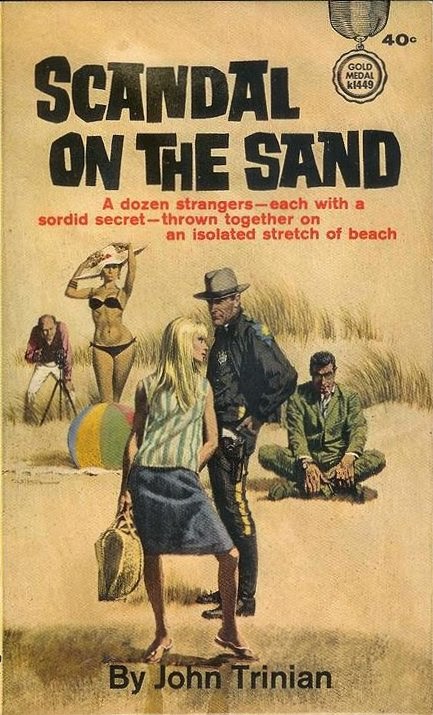 The second book in the anthology, Scandal on the Sand, also sounds like a Frankie and Annette movie, but it is even less like one than the preceding novel. It begins with a great, and totally surreal, first line:

“In the deep, in cold darkness, a hundred feet below he rocky cliffs and half-hidden among the fan fronds and greenly-waving fields of sea grass, the great gray whale hovered, his tail fins moving now and then to maintain his depth.”

The first couple pages are all from the whale’s point of view—an unorthodox narrative as exciting and it is insane, and yet Trinian pulls it off perfectly. The story is set into motion when the whale washes up on the beach, gets stuck, and can’t get back to the ocean.

An ensemble narrative like John D. MacDonald’s Cry Fast, Cry Hard, Scandal on the Sand follows a group of characters on a single afternoon that all come together because of the spectacle of the beached whale. There’s Karen and Hobart, a hookup from the night before that Karen resents and that Hobart thinks will lead to marriage. There’s Joe Bonniano, a wanted hitman whose picture is on the front page of the newspaper and who is hanging around for a delivery of money. Also near by is Mulford, a cop whose stupidity is matched by his ego and quick temper. Out for a stroll are Fredric, a one-time Hollywood star-turned-dope addict, and his wife, Becky; Riley, an ex-con tow truck driver; and even a sleaze photographer named Earle and his two bikini models. And overseeing all of this is Alex, a lifeguard too hungover to notice what is unfolding on his beach.

Scandal on the Sand is, in my eyes, an even greater accomplishment than North Beach Girl. Structuring the novel around the beached whale is just a magnificent, maverick concept that borders on the avant-garde. The whale functions as a unifying symbol for all the characters: a manifestation of their collective problems, disappointments, uncertainties, and pains. Confronting the whale brings out their true character—in some it reveals compassion, in others indifference, opportunism, and violence.

Like in North Beach Girl, Trinian’s characters are distinguished by their waywardness and uncertainty. In Scandal on the Sand, the action may be compressed into a single afternoon, but the characters experience years of life through their reveries and regrets. Unable to actualize any change in their lives, they’re stuck in a limbo consisting always of nights-before and nights-after-next; days are spent forgetting and planning, and rarely doing. Of Karen, Trinian writes, “She felt a terrible need to search for something, anything, inside or outside herself that would help erase the idiotic outcome of the night before.” Trinian also has Fredric ask his wife, “Becky, do you think that if I can manage it on pills today, pills alone, without anything else, that I’ll still be all right by this evening?” These aren’t characters living for the day so much as they’re struggling to just make it through. As Earle sums it up, “Sometimes I do good; sometimes I don’t. Beer one day, champagne the next. Up and down, and down and up. That’s life.”

Scandal on the Sand also has its moments of hardboiled noir philosophy, like this line that reads like something out of Richard Hallas’ You Play the Black and the Red Comes Up:

“What had Herb said? That Joe wouldn’t even break away from the post? That the odds weren’t in his favor? That was a laugh and a half. Joe had known that all along. Because that’s the way it had always been. Not matter what. Dice, roulette, poker, the horses. Everything always ended with a bust-out.”

North Beach Girl and Scandal on the Sand have whetted my appetite for Trinian, and convinced me that he is one of the true unheralded greats of the Gold Medal canon.
at May 18, 2014