"Blood on the Mink" by Robert Silverberg 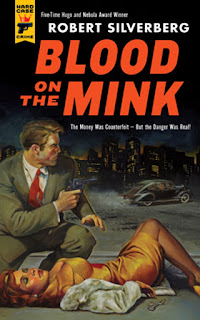 Robert Silverberg's criminal past has been coming to light—and I, for one, am thrilled, just as readers were undoubtedly thrilled decades ago. In 2011, Stark House Press republished two of the sci-fi master's earliest novels,  Gang Girl (1959) and Sex Bum (1963), both of which originally appeared under the pseudonym Don Elliott. These are from the heyday of smut paperbacks, a time when rising talent (like Silverberg, Donald Westlake, and Lawrence Block) were cutting their teeth on T-and-A-tastic yarns, honing their writing skills and getting paid for it. On a sadder note, veteran pulpsters like Harry Whittington, who could barely sell to legit paperback houses anymore, also resorted to the likes of Corinth to pay the bills.

And now comes another of Hard Case Crime's legendary rediscoveries:  Blood on the Mink, a "lost" Silverberg novel. It was originally published as "Too Much Blood on the Mink" by "Ray McKensie" in Trapped magazine in 1962. Trapped's second-to-last issue, it turns out: one of many casualties in the pulp era's retreat to oblivion in the 1950s and early 1960s. It was subsequently forgotten by most of the world, until Hard Case head honcho, Charles Ardai, turned up with a copy of that old magazine. Bless you, Mr. Ardai, for making noir-lovers' dreams come true, time and time again.

As it turns out,  Blood on the Mink is one of Hard Case's best rediscoveries yet. The story is about a government agent who goes undercover to infiltrate a counterfeit money operation in Philly. There's a momentum to these 158 pages that you just don't feel in today's crime novels. Perhaps it's simply the pace at which it was written—banged out as fast as possible so as to get the check as soon as possible—but I think it's something more. This is from an era before doorstop best sellers, when mysteries and thrillers couldn't be mistaken for a set of Shakespeare's complete works. Whether tales from the actual pulps, or full-length novels from the likes of Gold Medal or Lion, the best writing contained a sense of fury one couldn't find elsewhere. That inimitable sensation runs all through Blood on the Mink. It has a vein-bursting pulse, an ecstatic energy that surges through the pages. At times, it is almost drug-like: a hallucination of paranoid plots, constant adrenaline, and a nonstop parade of sex, violence, and subterfuge. 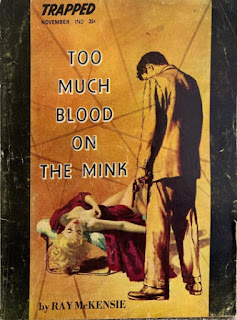 I started up out of the chair, ostensibly heading for the door. But Chavez reacted as I expected. The right hand went diving into the jacket to get the gun. I swung to my left and caught hold of him as though we were going to waltz, wrapping my left arm around his shoulders and grabbing his jacket-front with my right. He couldn't draw his gun out of the jacket—or his hand, for that matter. His face was white with hatred and surprise. I held him tight.

If you liked that, just wait until you read the climactic gunfight...

Reading  Blood on the Mink today, it seems like it should have been a crime fiction staple for decades by now. It fully embodies the finest craftsmanship that the pulps had to offer. Now that it is available once again—and to a wider audience than even in its initial printing—it will finally have the chance to become the classic it deserves to be. And with two more rare short stories in the mix, as well as an afterword by Silverberg himself, this is definitely one of the most fun Hard Case titles to come along in some time. I hope Hard Case continues to include more of these bonus features in future volumes.

(This review was originally published March 31, 2012 at the Los Angeles Review of Books. It has been slightly edited from its original form.)
at July 10, 2020